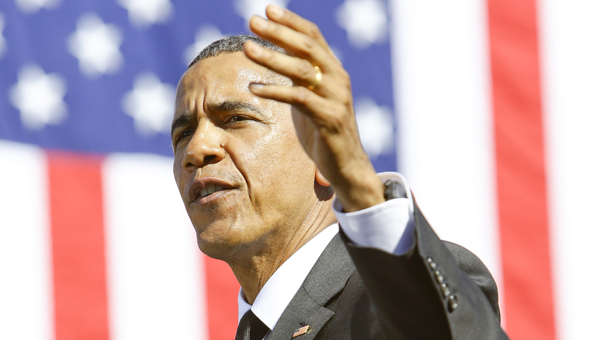 President Barack Obama said in an interview with the New York Times that his March 2015 speech in Selma was one of his favorites from his eight years in office.

In a recent interview with the New York Times, president Barack Obama said that his speech in Selma last year is one of his all-time favorites.

Obama spoke to the nation in March 2015 from the foot of the Edmund Pettus Bridge, where 50 years before marchers had been bloodied and beaten on a day now known as Bloody Sunday.

During the interview with the New York Times, Obama was talking with actor Bryan Cranston and the Times writer Philip Galanes. Obama was asked about his legacy and brought up his speech in Selma without prompting.

“I’ve given a lot of speeches. One of my favorites is one I gave in Selma, and there’s a riff when I talk about what America is,” Obama said. “I’m talking about Jackie Robinson and a ranch hand, about an immigrant on the Lower East Side and a bunch of G.I.s landing on the shores of Normandy. I love it because it captures the essential miracle of this country: all these pieces from every corner of the globe. It works in fits and starts. It’s messy, and it’s ugly. There’s sadness and tragedy. Yet something distinctive and full of energy emerges from it. And it captures the imaginations of people all around the world.”

More than 100,000 people visited Selma during the weekend of Obama’s speech. The president was introduced to the podium by Congressman John Lewis, who led the march in 1965.

“We gather here to celebrate them,” Obama said in 2015. “We gather here to honor the courage of ordinary Americans willing to endure billy clubs and the chastening rod; tear gas and the trampling hoof; men and women who despite the gush of blood and splintered bone would stay true to their North Star and keep marching toward justice.”

After his speech, Obama led a group of marchers, including Amelia Boynton Robinson, Lewis and others over the Edmund Pettus Bridge.

“What a solemn debt we owe. Which leads us to ask, just how might we repay that debt?” Obama said last year. “First and foremost, we have to recognize that one day’s commemoration, no matter how special, is not enough. If Selma taught us anything, it’s that our work is never done — the American experiment in self-government gives work and purpose to each generation.”