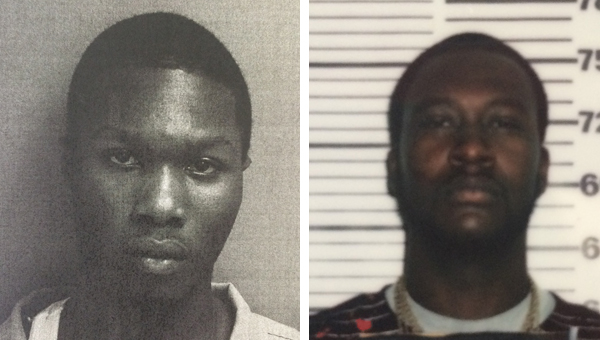 William Calhoun and Desmond Wright were arrested over the weekend.

“I think having these individuals in custody will help investigators look at all types of crimes that might have possibly been committed by these individuals,” said District Attorney Michael Jackson.

On Friday, Calhoun was charged one count each first-degree theft, third-degree domestic violence (assault), and attempting to elude. He is currently being held at the Dallas County Jail on no bond.

Jackson said police responded to a call of domestic violence. When they arrived, Calhoun stole his girlfriend’s car in an attempt to flee police after assaulting his girlfriend.

“He’s been a constant problem and also a suspect on a lot of violent crimes here in Dallas County,” Jackson said.

Jackson said Calhoun is known for his alleged involvement with gang activity in the area.

Detective Ronald Jones said Wright has been on the run since the arrest warrants were issued over a year ago.

Investigators said the victim was hospitalized and released a few days later.

Wright is a person of interest for the Kirby Dante Brown murder investigation.

“A lot of citizens have expressed concerns about the fact the Kirby Brown case hasn’t been solved. This certainly helps [and is a] step in the right direction,” Jackson said.

Brown was wanted on attempted murder charges at the time of his death.

He allegedly shot a 27-year-old Selma male in the head on the 900 block of King Street in November 2014.

Just a few months later in late January 2015, Brown was shot three times while walking out of his girlfriend’s home.

Jones said Wright has a history of robbery and is a subject of interest for various homicides and believes having Wright in custody will help move multiple cases forward.

Anyone with information about these cases are encouraged to call the police department.