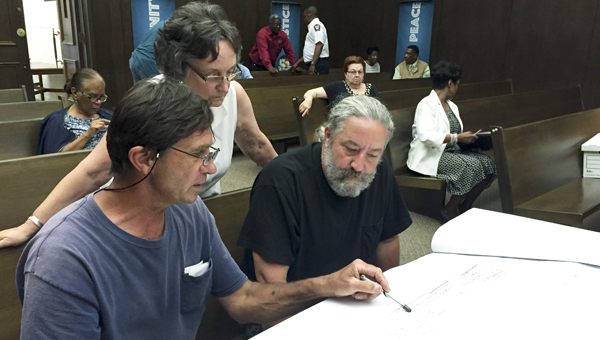 A project to revitalize part of Water Avenue has been revived itself.

After an almost two-year delay, bids will be opened next week for a streetscape project that will redo sidewalks, parking, lights and landscaping along Water Avenue.

The Alabama Department of Transportation awarded the city $435,000 for the improvements in 2013. Construction was delayed due to the 50th anniversary of Bloody Sunday and trying to find more money to complete the project on both sides of Water Avenue from Broad Street to Church Street.

A crowd of property and business owners gathered Tuesday for a public hearing on the project.

David Pierce, an engineer for Goodwyn, Mills and Cawood, told the audience the north side of Water Avenue would be redone from Broad Street to Church Street. Work will also be done around the Bienville Monument.

“The vision for this particular project was to continue the work we started on Water Avenue on the opposite side of Broad Street,” Pierce said.

However, Pierce doubted there would be enough money to do work on the south side of Water Avenue.

“We are trying to balance the scope of the project with the budget we have available,” Pierce said. “You ask the question why we don’t do everything. Well, we don’t have the money to do everything.”

The bids do include the option to redo the south side of Water Avenue from Lauderdale Street to Church Street should estimates come in lower than expected. Pierce said the city could always pursue additional grant money in the future to finish the street.

Work will begin in July and is expected to take four to five months to complete.

The city had also hoped to bury utility lines to match the other side of Water Avenue, but Pierce said that work was too expensive. To redo both sides of the street and bury the utilities could have cost $700,000 to $800,000.

“Due to budget constraints, it proved to be very cost prohibitive in order to do that,” Pierce said.

“It’s going to be a good thing, but it won’t be quite as complete as the one we did on the other side of Broad Street,” Evans said. “We just don’t have enough money.”

Bids for the project will be opened Thursday, May 19 at 3 p.m. in the council chambers at Selma City Hall.

Pierce said the delay might have been a blessing in disguise given the collapse of south Water Avenue.

“Had we progreseds with that and been able to construct that prior to now, some of that work might not even be there,” Pierce said. “I think that is a hidden prayer being answered.”