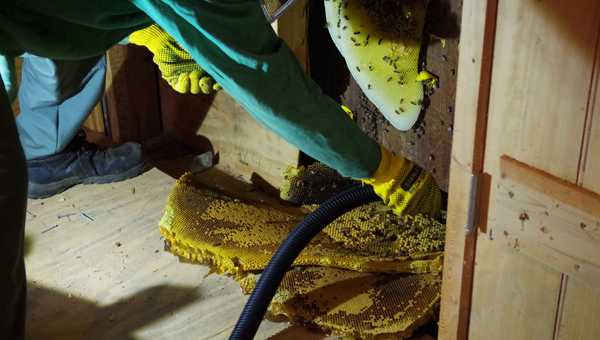 When thousands of bees accumulated inside a wall at St. Luke’s Church at Old Cahawba Archaeological Park, staining the wood with honey and potentially endangering visitors, site director Linda Derry knew something had to be done.

On Monday, Linda Hogue, along with her husband Joey, worked from sun-up to sundown removing what Linda estimates to be between 30,000 to 40,000 bees from the historic church.

St. Luke’s, which was consecrated in 1854, holds a special significance as being one of the few above-ground structures still standing from Alabama’s first state capital.

Derry said the bee colony started forming near the end of last fall and the beginning of winter.

“It was nice to find somebody that was willing to come work with us and remove them and find them a new happy home,” Derry said.

The bees now fly safely on a hill above the Hogue’s house. Linda Hogue said she has been beekeeping for about a year, and she didn’t hesitate to help preserve a historical building when asked.

Hogue said removing the bees will not only benefit preserving a historical structure, but it will also keep visitors safe.

“You never know when a bee will sting, and you don’t know who’s going to have an allergic reaction,” Hogue said.

Derry said that while visitors don’t often go inside St. Luke’s Church, a walking trail runs close to the building.

“We were really frightened if the bees did take a disliking to people on our nature trail, it might be a dangerous situation,” Derry said.

Derry said killing the bees was not something the park considered, and she was grateful the Hogues offered to help and finished the job in a day.

Perhaps the best result to come out moving the bees to a new home instead of killing them is the honey the bees produced. The park staff was able to enjoy the bees’ honey Monday, which Derry described as delicate and delicious.

Hogue said the bees might end up producing up to a gallon of honey, turning what was once an issue at Old Cahawba into a treat.

“These were gentle bees,” Hogue said.