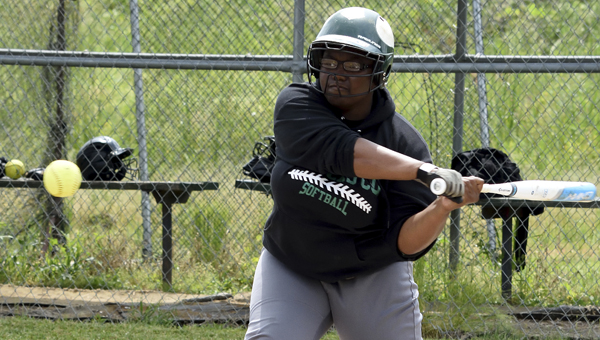 PLANTERSVILLE — After a short practice Tuesday afternoon, members of the Dallas County softball team helped head coach Willie Moore tarp the field. If everything goes as planned, the team will be back on the field practicing later this week.

But if it doesn’t, Tuesday was the Hornets’ final practice of the year.

“We are going to see good pitchers every game and good hitters every game,” Moore said. “The margin of error is very small in this regional.”

The Hornets (23-5) have been the most consistent team in the county this year, thanks to pitching from Tori Hatfield and just enough hitting. Moore knows his team hasn’t hit the ball well enough — or consistently enough — this year. Yasmeen Green, a junior, has four home runs, but Moore said the rest of the lineup hasn’t been hitting up to his expectations.

“We are going to have to at least get our pitcher five or six runs a game,” Moore said.

The team knows it’s going to need to hit the ball better in order to have a real chance to win too. Tuesday’s practice revolved around batting, with every player in attendance taking a few swings at the plate.

“I think that’s pretty much everybody’s weak point,” said junior Brittney Brown. “Just being aggressive at the plate, we have to get the bat off of our shoulders. All it takes is one or two people to get us started and once we get up there and everybody in the dugout keeps up the spirits and everything we have a good chance.”

Moore said he’s confident that Hatfield will give Dallas County a chance to win every game she pitches. The Judson College signee has had a standout year and has had a week without playing a game to get ready for the regionals.

Hatfield, a senior, has kept Dallas County in games throughout the year and won two games against Wilcox Central last week to get the Hornets to the regionals.

“Our pitcher will give us a chance game in and game out but can we play high level defense and can we make some extra plays in the field to cut off some runs that the opposing team would normally get?” Moore said.

For Dallas County’s seniors, Alexis Walker and Hatfield, Thursday’s game will be their final regional appearance and perhaps the end of their high school playing days. It could also be the final games for Moore, who said he’s not planning to coach softball next year.

The regionals will take place Thursday-Saturday in Troy.

The top two teams from the regional qualify for the state tournament May 18-21 at Lagoon Park in Montgomery.