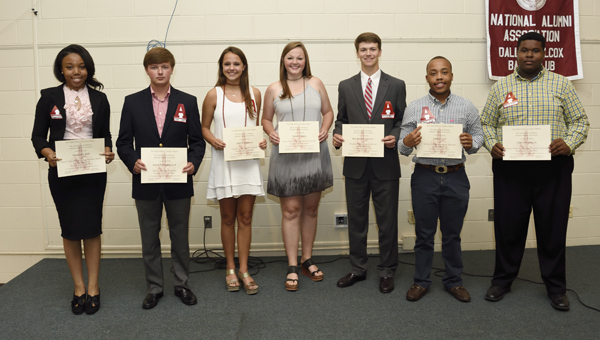 Each year, the Dallas-Wilcox Bama Club gives back to local high school seniors that will be attending the University of Alabama. On Monday night at its annual scholarship banquet, the club awarded $22,500 to 10 students from Dallas and Wilcox County.

“We are proud of you and proud of where you are going,” said Bama Club president Ronnie Leet.

Students from four different schools will split the money, giving them $2,250 apiece.

“It’s going to help me tremendously and take a load off my mom and dad,” said Ford, who plans to study chemical engineering.

Robertson said she knew from an early age that she wanted to attend the University of Alabama, which she called the best university there is.

Once there, she will study public relations. She said the scholarship will help a lot.

“Any money helps,” she said.

“I will put it toward my tuition and my books,” Dial said. “That’s the main thing I want to get out of the way.”

Three students from Thomasville High School could not attend the banquet because it was their school’s awards night, but also received scholarships.

Over last six years, the Bama Club has awarded about $123,000 to Dallas-Wilcox students.

The club has about 170 members, which Leet guessed it as many as the club has ever had.

During Monday’s meeting, the guest speaker was Tom Roberts, who served 16 years as the director of broadcasting for the Crimson Tide Sports network.

Roberts discussed his love for the University of Alabama and talked about working with coaches Gene Stallings, Mike Shula, Nick Saban and others. He also pointed out his extreme dislike for anything the color orange.

“I can’t stand the color. You won’t find any of it in my closet,” Roberts said to applause from the crowd.

Roberts also took a moment to congratulate the scholarship award winners and to look ahead at what they have in front of them.

“You’re in store for the time of your life,” Roberts said.

“It’s the best years you’ll ever spend because you’ll be in Tuscaloosa and you’ll be a part of the Crimson Tide family.”