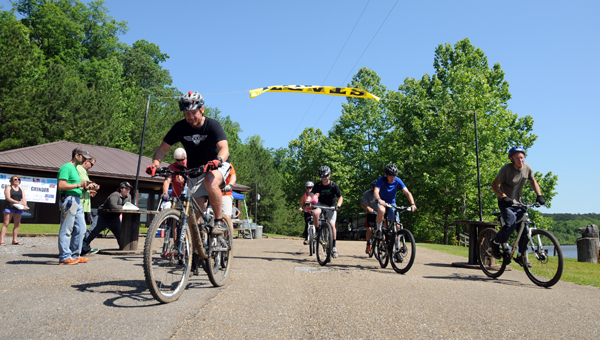 Jim Cogar and Robert High came out on top in the first annual Grist Grinder races, but Paul M. Grist State Park was the overall winner.

Cogar lead the way for the 5K trail race at 29:30 minutes followed by Allen Green and John Weaver.

High won the bike race at 49:09 minutes. Green followed shortly and Will O’Conner rounded out the podium.

“A lot of people don’t realize how beautiful it is out here, and [we] just wanted to get more recognition for the park so we can get more activity out here,” said BBG member Jeffrey Nichols. 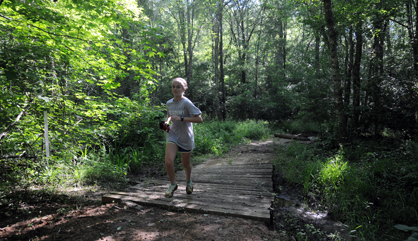 Jordan Harrison, 15, runs over a trail bridge during the 5K race.

The park was one of four in Alabama to shut down last year due to state budget cuts. However, that wasn’t going to be the end for the park. Within days of the park closing in October, about 45 citizens congregated to devise a plan to save the park.

They formed a group now called Friends of Paul M. Grist State Park. In early December, the group had successfully reopened the park under the control of the Dallas County Commission.

“Without volunteers, this park wouldn’t be what it is,” Nichols said.

Registration for the races was $25 each or $40 for both. People were invited to camp at the park for $25 the entire weekend or make a donation at the front gate for day admission. T-shirts were sold for $15.

Later that evening, people were invited to listen to music provided by Robert Bubba Hall, Cliff May, Morgan Duncan and others.

“I’ve done 5Ks and bike races, but never both on the same day,” said Green.

He said completing both races back-to-back was a new challenge for him. Green said he hopes to utilize the park more now that it has reopened.

“I used to come here a long time ago, I haven’t been here much lately, but I’m hoping to start using it more,” Green said.

Fifteen-year-old Jordan Harrison only participated in the 5K. She said she used to run in school and was excited to hear about the event.

“I was really sad when they said they were going to close the park because I like to come down here at spring break with my friends,” Harrison said. “I was excited to come support it and keep it open.”