Trippe gives back thru food pantry

Since the early 1990s, Bill Trippe is has been donating his time and efforts to the Selma Christian Outreach Alliance Food Pantry.

Trippe was one of the several volunteers unloading boxes of food onto shelves and freezers at the pantry on Wednesday, to get ready for distribution Thursday morning. 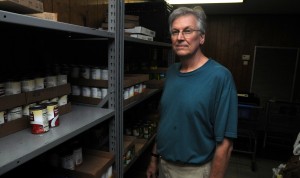 Bill Trippe has been volunteering at the Christian Outreach Alliance Food Pantry since the early 1990s.

He is a member of St. Paul’s Episcopal Church. Trippe said other church members were affiliated with the pantry and that’s how he became involved. He believes the work is important because it helps feed people in the community who are hungry.

Trippe spends about three hours every week doing tasks for the pantry, but every week it begins at the Selma Area Food Bank.

“I’m sort of in charge of inventory,” he said. “I go down to the food bank every Wednesday morning and pick out items.”

After items have been picked out and brought back to the pantry, Trippe and about half a dozen volunteers systematically unload the boxes of goods. In what seems like a matter of minutes, shelves are packed full of boxed pasta, jars of pasta sauce, cans of vegetables, fruits, soups and stews. The freezers are stuffed with frozen desserts and other items.

In the next room, non-perishable foods have been bagged and tied. Bible verses are printed on small cards and placed into the bags.

“[The verses are] just inspiration for the people that come in here,” he said.

The next morning, volunteers distribute groceries from 10 a.m. – noon.

An estimated 250 bags are distributed every week.