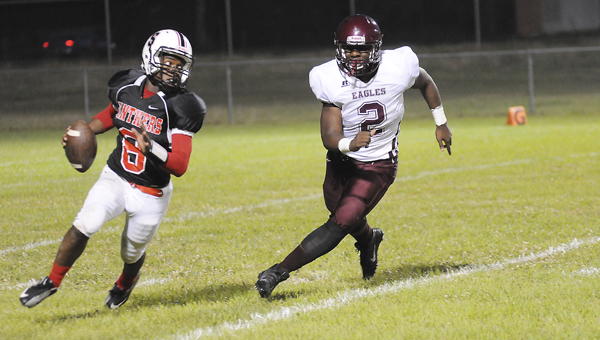 Southside quarterback G’Neil Johnson scrambles out of the pocket to avoid the sack of A.L. Johnson defender Johnny Robertson during the Panthers’ spring game Friday night at home. After the game, Southside head coach Daniel Flowers said G’Neil earned the starting quarterback job due to his performance in the game. — Justin Fedich

The result of the game won’t count in the win-loss column, but Southside played like the game was anything but meaningless.

The Southside Panthers defeated the A.L. Johnson Eagles 38-0 during a spring game at Southside Friday. The Panthers’ defense turned the ball over on the first play of three separate Eagles’ drives, a quarterback won a starting job and speedy wide receiver DeQuan Johnson proved that, if anything, he’s only gotten faster.

“I asked for a shutout and the guys gave me a shutout,” said Southside head coach Daniel Flowers. “I can’t ask for more than that.”

The game started off with two of Southside’s most notable returning players — Johnson and Ke’Andrae Rutledge — carrying the ball. Johnson carried it for 12 yards and Rutledge toted the ball for a 31-yard gain, but he lost a fumble at the end.

Southside’s Chris Edwards recovered an A.L. Johnson fumble to bring possession back to the Panthers. On the next Southside drive, quarterback G’Neil Johnson passed to DeQuan in the left corner of the end zone for a 26-yard touchdown with 8:33 remaining in the first quarter. G’Neil took a quarterback draw in for the two-point conversion to make it 8-0. Flowers said after the game that G’Neil’s performance in the spring game earned him the starting quarterback job.

Southside held an 8-0 lead until halftime. At halftime, Flowers challenged his players to take their game up a notch because he knew they were capable of more.

It only took one play for the extraordinary play to happen. In the first play of the second half, Rutledge forced a fumble that fell right into the hands of Nick Bennett, who sprinted down the middle of the field untouched for a touchdown. Southside fumbled the two-point conversion, but still led 14-0.

The Panthers forced a turnover on downs, but needed to march more than 70 yards to score again. After one incompletion to begin the drive, G’Neil handed it off to DeQuan on a reverse, and he weaved through defenders to take it 73 yards for the score. Rutledge tacked on the two-point conversion.

The A.L. Johnson continued to flounder in the second half, as Rutledge and Bennett found themselves in the Eagles’ backfield throughout the night.

Rutledge added a 17-yard touchdown with 4:34 remaining in the fourth quarter, and Warb Moton converted the two-point try to extend the lead to 30-0.

On the next play, Southside’s Rickey Webster intercepted the ball and returned it 30 yards. Edwards punched in a 5-yard score with 2:27 left in the game. G’Neil threw it up to Keshawn Arrington for the Panthers’ fourth two-point conversion of the game.