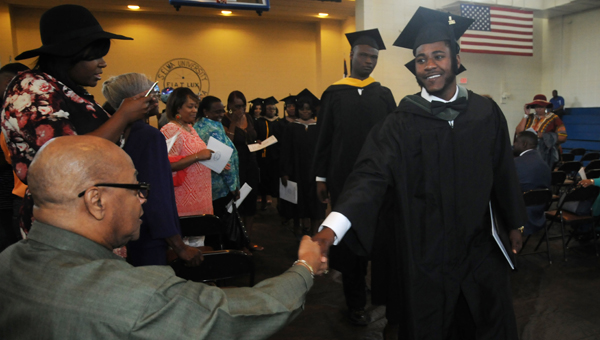 It was a small graduating class, but a big milestone for each of the students that graduated Friday afternoon from Selma University.

“I’m feeling great,” said Selma graduate Emma Moore. “It has been one of the greatest moments in my life. It’s a memory I’ll never forget.”

“It means a bright future, a better future for me,” Moore said. “I have really grown in the ministry and matured in the word.”

Moore plans on continuing her education at Selma University. She said she has already registered for the master’s program.

Like Moore, Ahmad Jackson plans on returning to school eventually. The Lanett native graduated with a Bachelor’s of Arts degree in general physical education and hopes to become a coach.

“It means a lot, but I know it isn’t the end of the road for me,” Jackson said.

Jackson said he plans on returning to school in August to further his education.

His mother, Carla, said she is proud of him for staying focused and getting his degree.

On the other hand, Camden native Leatrice Woods plans on going straight to work. She and her sister, Shameka, each graduated with Bachelor of Arts degrees in business administration. Woods said she wants to use her education to help others pursue their dreams in business.

“I want to start my own business, and I want to help young people to learn how to work and [how to] start their own business and work for themselves,” Woods said. “I’m excited. I’m very excited.”