Longtime business owner Clyde Wilbur Harrell, 81, of Harrell’s Refrigeration Service passed away on Tuesday, May 3, in his home with his family at his side. 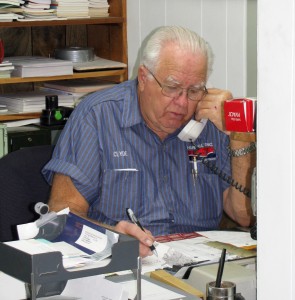 He is survived by his wife of 58 years, Ruth, and two children, Curtis and Marie, along with other family and friends.

Harrell was raised in Live Oak, Florida. While serving in the Air Force, he transferred to Selma in 1960 to work at Craig Field Air Force Base. After retiring from the military and working in the appliance business for a few years, he and his wife opened their own refrigeration service in 1973.

“He always kept his word. If he told somebody he’d do something, he’d do it,” Marie said.

Marie described her father as quiet and passionate about his work. She said he was well-respected and trusted.

“People that knew him, that didn’t live in town, when they had an appliance that went out, they trusted him so much they would call and just tell him to bring them one. If they needed a refrigerator, he’d just bring it. They didn’t come look. They trusted him,” she said.

James Brantley was only a junior in high school when Harrell first hired him. Brantley said he knew Harrell because he was in scouts with Harrell’s son.

“I basically just walked into here one time, looking for a part time job, not expecting him to hire me, but to see if he knew of anywhere,” Brantley said. “He called me later that night and said, ‘When do you want to work?’”

Brantley, now vice president of the business, is happy to have had the pleasure of working with Harrell.

“He was a great teacher and mentor. He taught me all that I know, basically,” Brantley said. “He was a great boss. One of the fairest men you’d probably ever run into. He was just a super person. You won’t find anybody who’d be like him.”

Visitation will be Friday, May 6 from 6-8 p.m. at Lawrence Brown-Service Funeral Home. Services will be held on Saturday, May 7 at the funeral home.

Marie said she plans on continuing to run the business how her father would have wanted, with the help of Brantley and everyone who works there.