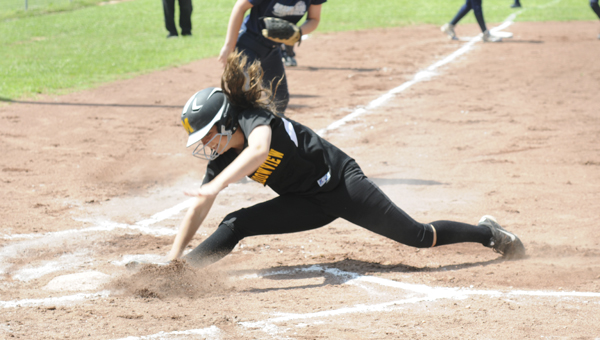 Meadowview Christian’s Mallory Freine was tagged out sliding into home plate during a playoff game against Brooklane Tuesday. Freine hit two doubles and a single to lead her team to a 10-2 victory at home, sending the Trojans to the state tournament Friday to play Tabernacle Christian at New Life Christian Academy. — Justin Fedich

Meadowview used a steady flow of offense to beat the Brooklane Eagles 10-2 Wednesday at home in the sub-state round of the of the Alabama Christian Athletic Association state tournament. The Trojans advance to play Tabernacle Christian Friday at 10 a.m. at New Life Christian Academy in the state tournament.

Brooklane took a 1-0 lead in the top of the first inning when Mackenzie Batson drove home Shelby Moore, who reached base on a Meadowview error.

“They made a couple of errors, but they made up for it with their bats, and that’s what it takes to win a ball game,” said Meadowview head coach Cherie Grimes.

In the bottom of the first inning, Meadowview answered with three runs. Mallory Freine led off with a double, and Kalee Jones drove her home with a base hit. Shelby Boswell, who pitched the entire seven-inning game for Meadowview, stepped up to the plate fourth for the Trojans and hit a two-run home run to score Jones and herself.

Only four batters into the game, Meadowview led 3-1. In the bottom of the second inning, Freine hit her second double of the game, but she was thrown out trying to make a run for home plate.

With the score still 3-1 in the bottom of the third inning, Meadowview started to open up a sizable lead. Boswell reached base after getting hit by a pitch from Batson, and Christina Dabit drove Boswell home to make it 4-1. A couple Brooklane fielding errors loaded the bases, and Kameren Burton sent Dabit home with a base hit to extend the lead to 5-1. Alyssa Verhoff and Tayler Roberts crossed home plate before the inning was through, and the Eagles went into the top of the fourth inning in a 7-1 hole.

For the third straight inning, Boswell kept Brooklane from getting a hit, but Meadowview was unable to score any more runs in the bottom of the fourth inning.

After another scoreless inning in the top of the fifth inning from Brooklane, Meadowiew piled on three more runs in the bottom of the fifth inning. Freine kept her strong day at the plate going, notching her third hit of the day with a single.

“I can always count on Mallory to get on base,” Grimes said.

A few batters later, Freine scored on a bases-loaded wild pitch. Boswell put the game just about out of reach with a double that brought Jones and Maggie Tipton home to push the lead to 10-1.

In the top of the sixth inning, Batson hit Moore home again, as Moore beat the throw home. The Trojans made up for allowing a run when Tipton threw out Batson at second base. On the next play, Freine drilled a shot to Dabit at third base to throw out Star Edwards.

Boswell closed the game out in the top of the seventh inning to propel Meadowview on to the next round.

Grimes said her players have become much more focused over the past few weeks, and if they stay that way, she has high expectations for what they can achieve this weekend.

“They stay focused, they can definitely win it all,” Grimes said.