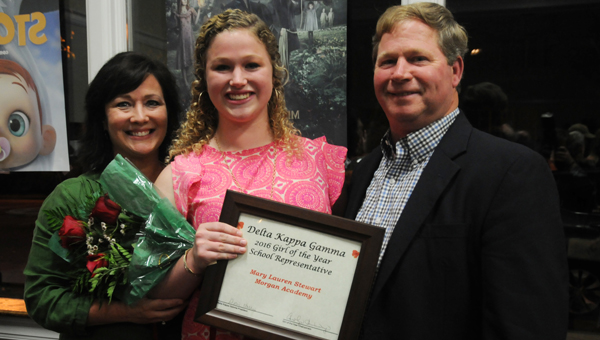 2016 Girl of the Year Mary Lauren Stewart poses for a photo with her parents, Shannon and Jon. The annual Girl of the Year program was held Tuesday evening at the Larry D. Striplin Performing Arts Center.

On a stage with 18 other girls, Stewart couldn’t hold back her smile as the description of the winner became more and more apparent. Delta Kappa Gamma awarded its annual Girl of the Year scholarships Tuesday evening at the Larry D. Striplin Performing Arts Center.

“It means the world to me,” Stewart said. “At first I was confused and was like, ‘I’m not sure this is me,’ and then it started to get more specific and I was like, ‘Oh my, it’s me.’ I was just really excited, and I was so surprised because there were so many great girls up for this award.”

Stewart was awarded a $2,500 scholarship. School finalists were each awarded $200.

“Every single lady who was representing their school here was worthy of being girl of the year. Thank goodness we use a point system because if we didn’t, I would not like having to choose,” said Girl of the Year co-chairman Carolyn Dunaway, “We are proud of them all. They all deserve a great congratulations.”

Girls were graded on a point system. Points were awarded in different categories including academics, extra curricular activities and community involvement and service. In addition, each girl was interviewed and had to write an impromptu essay.

“I remember the Girl of the Year and the Boy of the Year growing up, and they’re such great people and for her to be honored like that, associated with all the previous girls of the year, it’s just a great honor,” said Mary’s father, Jon.

Morgan Academy interim headmaster Karim Oaks said she knew Mary was the winner when they began reading off the description of the winner.

“When they started listing her specific activities, and I kind of looked at her and one of her classmates was sitting next to me and he said, ‘It’s Mary.’ We both knew it was Mary,” she said. “She is one of those students who everyone loves, all the teachers lover her, all her peers love her. She’s a true leader and we expect many great things from her.”

Mary plans on attending Auburn University to study communications with a minor in public relations.

“It’s just a great opportunity and I’m so excited that I got it,” Mary said.