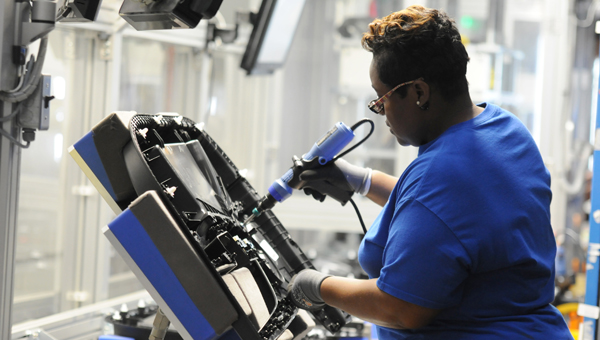 Dallas County did better than the majority of other Alabama counties in industrial job creation and capital investment in 2015.

Dallas County did better than the majority of other Alabama counties in industrial job creation and capital investment in 2015.

That’s according to an analysis of numbers recently released by the Alabama Department of Commerce.

Industries in Dallas County added 241 jobs last year and invested more than $63 million in their operations, according to the 2015 New and Expanding Industry Report.

“We hear a lot of negatives about there are no jobs in Selma and that type thing but we know that there are. I think it’s important for us to make people aware of it,” said Wayne Vardaman, executive director of the Selma and Dallas County Economic Development Authority.

Dallas County’s numbers were based off one new industry, Aguila Recovery Products, coming to Selma and six expansions at existing companies.

The largest job creator and capital investment in 2015 belonged to Zilkha Biomass Energy.

The company manufactures a black pellet that can replace coal as an energy source. The Selma facility on the Alabama River next to International Paper is the first of its kind in the world and accounted for 65 new jobs and a $50 million investment.

“It just shows you what existing industries can do. They can start at 120 employees, and you just kind of help them and work with them, and over the years that can end up being 450,” Vardaman said.

Of those existing companies, Hanil E-Hwa invested more than $10 million in upgrades, while PalletOne invested $1.3 million.

“I think the big story here is existing industry is well and doing good in Dallas County,” Vardaman said. “That’s important because that’s where 80 percent of your growth comes from in your community — not new industry but existing industry.”

EDA Board Chairman Andy Stewart, who is also president of the local Trustmark Bank, said an additional 60 jobs were added at Bush Hog and PalletOne that weren’t reported to the state.

“To me the story in Selma and Dallas County has been good for a few years now. We just haven’t gotten the news out there like we should have,” Stewart said. “I just think better things are yet to come. The future is bright.”

The numbers released by the Department of Commerce were based on incentive packages approved by local municipalities as well as figures companies reported to the state.

Vardaman, Stewart and Dallas County Probate Judge Kim Ballard all agree workforce development has to be focused on going forward.

Vardaman said he considers full employment in Dallas County to be around 7 percent, which is about where jobless rates were prior to the recession.

As the economy continues to improve, Vardaman said it’s important to make sure companies have well-prepared employees. The jobless rate in March was 9.1 percent.

“The way you know you are just about at full employment is when companies start complaining that they can’t hire anybody,” Vardaman said. “I attended a meeting two weeks ago with a couple of companies who had concerns about their future success due to the fact we are getting back to that point.”

Ballard said some people aren’t unemployable because of past criminal records or because they can’t pass a drug test, but something could be done to help those who need more training or education.

The most highly recruited positions needed are electricians, welders and machinists, but Vardaman said the challenges employers face are more elementary.

“About three or four years ago I was in charge of regional rural development for the state and went all around the state working. The biggest thing I ran into in every region was this — cannot read a ruler and does not understand one page of simple instructions,” Vardaman said. “That makes you almost want to cry.”

Vardaman said local schools and manufacturers are working to prepare students to enter the workforce after graduation.

“What we are trying to do is shift the paradigm from the fact that you have to go to a four year college, to look, you can go to technical school and make a whole lot more money getting out of school,” Vardaman said.

Vardaman said he along with Bush Hog President Jerry Worthington, and different human resource managers, have a meeting with high school parents every year to talk about career options, but only about 50 parents attended this most recent session. He said the group might try to reach younger students and their parents going forward.

“We are going to try to back up and see if we can come at it from a different direction, Vardaman said. “It’s not an easy nut to crack.”

Vardaman said many low-skilled jobs simply don’t exist anymore due to advances in technology and that nobody wants to recruit poor paying jobs anyway. He said better paying ones are out there, but they demand more education and skills.

“To get higher paying jobs, you have to have the skill set to do it, and that’s where we are at,” Vardaman said. “Somewhere the system has failed children out there in terms of getting these prerequisite skills required to be qualified.”

While Zilkha Biomass Energy made a big splash in 2015, Vardaman said 2016 is shaping up to be a good year, too. He said several manufacturers, including Bush Hog, International Paper and PalletOne, were continuing to expand while all the other industries were holding their own.

The county is still hopeful to land a contract with Science and Engineering Services (SES) to bring a Kuwaiti pilot training program to Craig Field.

“We are still chasing aviation. It’s not dead, but I can’t say whether we will or will not get it,” Vardaman said.

Vardaman said his time with the EDA has taught him that some projects take longer than others to finalize. Dallas County has been in the running for the pilot training program since 2014.

“The typical project that comes in here from the day I see them until the day they turn dirt, or do something, is about two or two-and-a-half years,” Vardaman said.

Even if Craig doesn’t land the contract, Vardaman said the experience has still been beneficial for economic development.

“They (SES) love it here, but if this doesn’t work out, something else will,” Vardaman said. “All I can tell you is it’s continuing to move forward. No decision has been made, and we are still in the finals.”

The national attention brought to Selma during the 50th anniversary of Bloody Sunday might have been a double-edged sword.

Vardaman said the EDA is fighting a misconception spread by national media that there is no industry or jobs in Dallas County.

Dallas County has 25 manufacturing companies spread across the county and multiple industrial parks.

“For a small county, that’s a lot of manufacturing companies,” Vardaman said. “If you compare us to other counties, we are very competitive. We stack up against some pretty good counties.”

About 5,200 people come into Dallas County from neighboring counties every day for work. Vardaman said that’s proof that there are jobs across industry, healthcare, education, retail and government.

“The biggest thing that we need to let people know is that we do have jobs here,” Vardaman said.