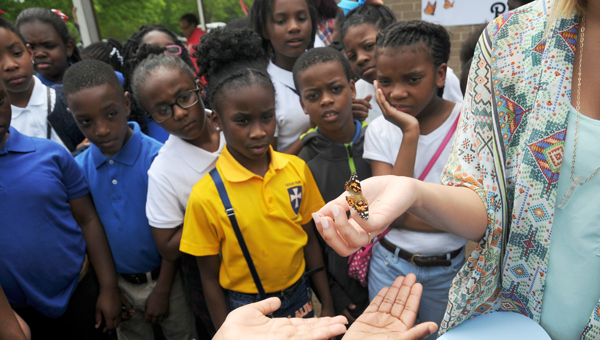 Students and faculty were invited outside to watch the presentation. The second grade students read facts about butterflies and sang a song before releasing 11 Painted Lady butterflies into the school’s garden.

To conclude the ceremony, every student was given a pinwheel to plant along the edge of the flower garden.

“They were the ones who planned the butterfly release party, told me what we should have, what flowers we needed to order and plant. They were the ones who were taking over everything. I was just really there to facilitate,” said second grade teacher Emily Cothran. “It’s absolutely incredible to see them curious about learning.”

The week leading up to the butterfly release, students sold butterfly shaped fans for a dollar and temporary tattoos for 25 cents to raise money to donate to the Central Alabama Regional Child Advocacy Center.

“It is just amazing. These little guys have been so sweet,” said advocacy center executive director Laurie Cothran. “I came and talked to them last week, and they had already made the choice of making the donation.”

Laurie said the Cedar Park pinwheel garden was the last one for the month. During the month of April, pinwheel gardens were planted throughout Bibb, Dallas, Hale, Perry and Wilcox counties to raise awareness for Child Abuse Prevention Month.

Emily said the caterpillars were delivered to the office, and when her students saw them, they took off with the idea for the whole thing. Emily believes the butterfly project will initiate a ripple effect within the school and inspire other classes after seeing how excited her students were.

Eight-year-old Rishya Cooper said had fun with the project and believes other students would too.

“I learned that butterflies can stay in their egg for seven to five days,” Cooper said. “They were gorgeous and cute and pretty ,and I think our teacher should start with the first graders.”

After the ceremony, Emily’s class regrouped in their classroom for butterfly shaped and inspired snacks.