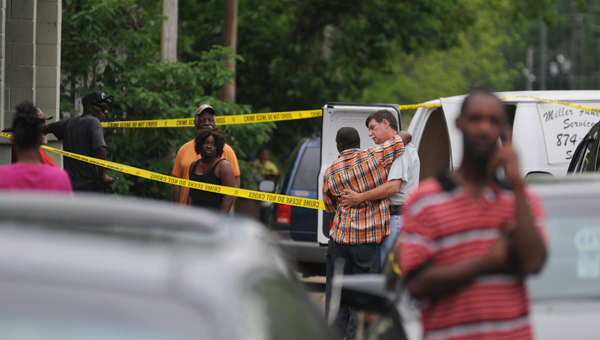 Police Chief John Brock comforts a man at the scene of a shooting at the intersection of L.L. Anderson and Lawrence Street. (Photo by Justin Averette | Times-Journal)

Two people, a man and a woman, have died in a Saturday afternoon shooting inside a home at the intersection of L.L. Anderson Avenue and Lawrence Street.

Brock said no additional information about the victims would be released Saturday as family members were still being told about the deaths.

“We had a domestic violence shooting. We are investigating it. We are awaiting forensic science, [but] we have a good idea what happened,” Brock said.

Brock said police aren’t looking for any additional suspects but said he couldn’t elaborate at this time. He wouldn’t say if the scene was a murder-suicide.

“There is no other suspect,” Brock said. “We are interviewing several witnesses. We are just in the process of doing the investigation.”

The shooting happened around 4 p.m. Saturday inside a home in the 1500 block of L.L. Anderson Avenue. Police worked the scene for several hours as crowds gathered to watch the investigation.

Brock said autopsies would be performed in Montgomery on both victims, and it could be Monday before those are conducted.

Look for updates on this story online at www.selmatimesjournal.com and in Tuesday’s edition of the Times-Journal.