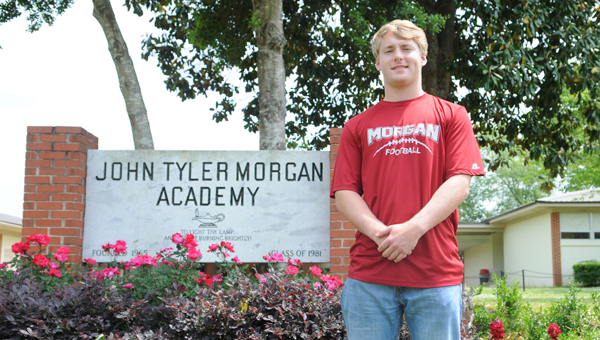 Woodham Kemmer will graduate from Morgan Academy later this month and head to Sewanee.

Roma Woodham has many moments that stick out in her mind from watching her grandson Woodham Kemmer play three sports at Morgan Academy. Her favorite memory happened when the rest of his teammates were in the locker room.

On October 16, 2015, Woodham’s younger sister, Sarah Jane, was introduced as a freshman member of the Morgan homecoming court with hundreds of students, parents and alumni in the stands as Morgan celebrated its 50th anniversary. When Sarah Jane’s name was announced, Woodham ran toward the field with his football jersey on and escorted his father Mitch onto the field to meet Sarah Jane.

On that night, Woodham was the one guiding Mitch, who was completely blinded in a car accident when Woodham was 2-and-a-half years old.

Throughout Woodham’s life, however, Mitch has been the man guiding him, teaching Woodham how to overcome obstacles and make the most of each day.

“I’ve never tried to use the fact that I don’t have vision to try to make anyone feel sorry for me,” Mitch said. “I’ve just tried to work in a sighted world. I think Woodham has seen that, and it’s made him work harder. We don’t feel like we’re any different.”

Woodham, an 18-year-old senior at Morgan, plans to attend Sewanee in Tennessee next school year, and he’s earned over $60,000 in scholarship money toward the school.

In April, Woodham won a $1,500 scholarship from the Rotary Club of Selma, representing his school and speaking in front of a crowd to earn the honor over student representatives from every other area school.

Woodham shared with the club all he’s learned from watching his father overcome his blindness.

“I was very proud and I was so happy for him,” Woodham’s mother Stephanie Kemmer said. “I think it takes a lot of courage.”

Woodham and his family live in Centreville, and Woodham and Sarah Jane drive 45 minutes to and from school each day.

Stephanie says its taught Woodham time management, especially since he played three sports — football, basketball and baseball — during his time at Morgan.

Throughout his athletic endeavors, Woodham found a balance, starting on each of the three sports teams and holding a GPA above 4.0.

He said he wouldn’t have been nearly as successful as he’s been without the support and guidance of his parents and Morgan Academy.

“If I wouldn’t have come to Morgan, I wouldn’t be sitting in the situation I am now,” Woodham said.

Both Stephanie and Mitch have given Woodham lessons that he lives by. Woodham said Stepahnie has taught him that life isn’t about him; it’s about helping others.

Growing up, Woodham saw Stephanie help Mitch slowly recover and adapt from his accident, and it gave Woodham an example of how to care for others when they face any kind of challenge.

Woodham doesn’t remember the accident that changed his father’s life, but it’s had a profound impact on how Woodham views everything he does.

“He’s shown me when you get knocked down, you have to get back up,” Woodham said. “No matter what the circumstances are, you just have to keep fighting through and make the best of your situation.”

Mitch said one of the greatest lessons he’s taught Woodham is to overprepare for everything. Woodham has taken that advice and ran with it.

“Anything he tackles, he does it with 110 percent,” Mitch said. “He hates to lose and he hates to finish second. It doesn’t matter if you’re playing touch football in the yard or if he’s playing football at Senators stadium.”

At Sewanee, Woodham plans to minor in business and major in either philosophy or history. Afterward, he intends to go to law school to become a lawyer like his father.

Woodham said he’s received helpful advice from his older brother Richard, 31, and sister Lauren, 33, as well as his guidance counselor at Morgan, Sheryl Schroeder, about how to approach the next step after high school.

“You need to find that balance to really make the most of your college experience,” Woodham said his siblings tell him.

Woodham’s teammates, coaches and family members describe him as someone who loves being around people. Stephanie said she can’t see Woodham having a career where he wasn’t working in some sort of team environment.

Woodham said he enjoys striving to make others better. When a teammate misses a shot in basketball, he will always try to tell them how to improve instead of tearing them down.

“I really feel like I encourage people very well, and I make others around me feel at home, and in sports, I feel like I bring the best out of people,” Woodham said.

While Woodham has excelled on multiple athletic fields and in the classroom, it’s his compassion toward others that gives those close to him confidence that he will truly lead a successful life.

“He cares about people and hopefully that will carry him a long way,” Roma said.