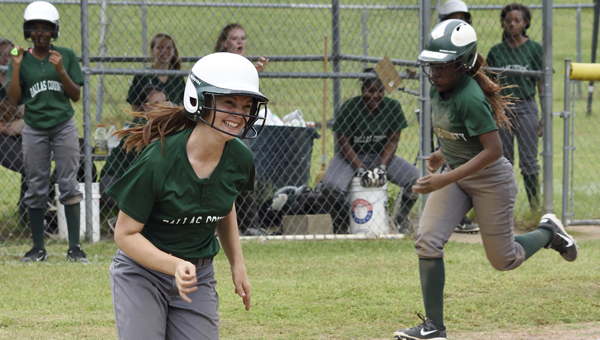 Dallas County High School pitcher Tori Hatfield smiles after laying down a bunt during Wednesday’s game against Ellwood Christian. Hatfield and the Hornets will play Wilcox Central in the first round of the class 5A, area 6 tournament Wednesday at Demopolis High School. –Daniel Evans

It’s playoff time for softball teams within the Alabama High School Athletic Association. This week teams from around the state — including four local schools — will take part in area tournaments.

The math is pretty simple. If Dallas County, Southside, Selma or Ellwood Christian win two games in their area tournaments, they will move on to the regional portion of the AHSAA playoffs. Anything less will mean their season is over.

An added bonus is that each of the area tournaments are double elimination, so winning means playing less games throughout the day.

Dallas County (20-3), which sports the best record in the county, will play Wilcox Central  Wednesday in the first round of the class 5A, area 6 tournament. If the Hornets win that game, they’ll face Demopolis for a chance to play for the area championship.

Moore said an area title would be great, but he knows his team’s biggest goal is to defeat Wilcox Central twice and advance.

“From a coaching point, we have to beat one team twice and that one team that we have beat twice is Wilcox to get to the regionals,” Moore said. “However, our goal is to go down there and compete and beat whoever we play.”

Moore said pitching ace Tori Hatfield, who has a 19-3 record this season, will start the first game against Wilcox Central. Hatfield has started all but one game for the Hornets this season, so it’s not a surprise the Hornets will lean on Hatfield against the Jaguars.

However, Moore said Hatfield may not pitch in a potential second round game against Demopolis.

He said he’d rather have her fresh for a potential elimination game against Wilcox Central later in the day.

“Our plan is she going to pitch the two games we need her to pitch to get her to the regionals,” Moore said.

“She may not pitch against Demopolis because at this point if we don’t do the little things when we get runners on, we can’t make timely hits and defend well and run the bases well and pitch well, we don’t have a chance of beating Demopolis.”

Dallas County won its two games against Wilcox Central 18-0 and 15-0 this season. Hatfield was the starting pitcher in both of those games.

Demopolis defeated Dallas County 16-4 and 9-3 in a doubleheader in mid-April.

“They don’t beat themselves. The difference between [Demopolis] and us right now is if a ball is hit in the gap, they are going to see the ball off the bat and they are already in motion,” Moore said.

The entire tournament will be played Wednesday, with the top two teams moving onto the regional round of the postseason.

Here’s a preview of the rest of the AHSAA area tournaments for local schools:

Ellwood Christian will play Georgiana on Tuesday at 11 a.m. in the first round of the class 1A, area 4 tournament at J.U. Blacksher. The Eagles lost games to Georgiana this season 15-0 and 19-4.

Whoever wins the opening game will play J. U. Blacksher at 12:30 p.m., while the loser will play an elimination game at 2 p.m. There are only three teams in class 1A, area 4 so the entire tournament will be played Tuesday.

Selma will play Hillcrest-Tuscaloosa in the first round of the class 6A, area 6 tournament at Hillcrest at 4 p.m. on Thursday.

Chilton County and Paul Bryant will play in the other opening round game. Whoever loses those games will play again Thursday night at 8 p.m., while the winner won’t play again until 10 a.m. on Friday.

Selma lost to Hillcrest 16-0 and 16-1 in the team’s two meetings this season.