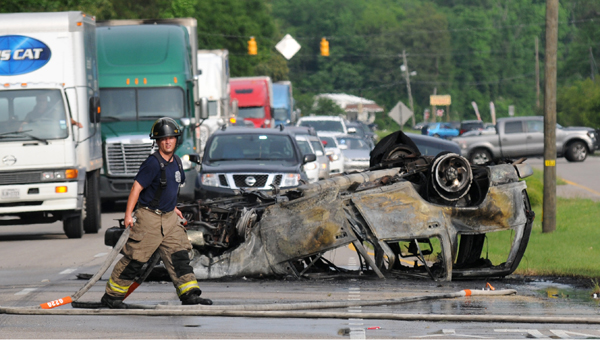 One of the victims in a two-car accident fled the scene after the SUV he was driving flipped over and caught on fire.

One of the victims in a two-car accident Friday fled the scene after the SUV he was driving flipped over and caught fire.

First responders were called to the collision at the intersection of Highway 80 near Craig Field just after 4:40 p.m.

When they arrived, they found the SUV overturned and on fire. The second car, a black Nissan sedan, was mostly damaged along its front bumper.

The driver of the sedan, a woman in her mid to late 50s, was taken to Vaughan Regional Medical Center due to chest and arm pain, according to witness Kimberly Walker-Crowe.

“Usually when we have accidents like that, when they leave the car, they’ve done something wrong,” said Battalion Chief Alton Green.

Authorities believe the accident was caused by one of the two vehicles running a red light.