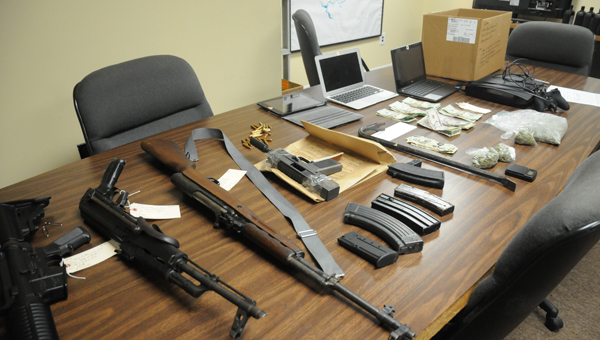 The Dallas County Sheriff’s Department recovered firearms, bags of marijuana and electronics after arresting 32-year-old Andrae Ellis and 19-year-old Ladarius Parker in connection to a burglary on the 900 block of County Road 83.

The sheriff’s department arrested 32-year-old Andrae Ellis and 19-year-old Ladarius Parker in connection to a burglary on the 900 block of County Road 83.

Capt. Mike Granthum said the victims’ home had security cameras, and investigators were able to identify the suspects’ vehicle. However, the case was brought to an even quicker resolution with the help of tracking ability in the stolen property.

“They stole an Apple product. We were able to ping it, and it find out where the Apple product was,” Granthum said.

The device led investigators to a residence at Craig Field in the Selmont area.

Granthum said when law enforcement arrived on the scene, Ellis darted out the back of the residence and dropped two computers while running. After a brief foot chase, deputies apprehended Ellis and learned of another suspect, Parker, inside the home.

Four firearms, marijuana, cash and reported stolen electronics such as an iPad, MacBook computer, Dell laptop and others were retrieved.

“So far one [of the firearms] has been identified as stolen from another jurisdiction,” Granthum said.

Ellis was charged with first-degree unlawful possession of marijuana and third-degree burglary with bonds totaling $45,000.

“He has an extensive criminal history,” Granthum said.

Previous charges for Ellis include possession of a controlled substance, chemical endangerment to a minor, failure to appear on a misdemeanor and others.

Parker was charged with third-degree burglary with a $30,000 bond.