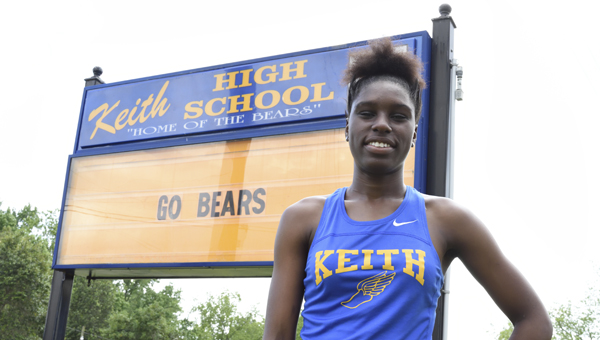 “I like the challenge, the push,” Johnigan said. “In life you are going to come across things … and you’ve got to strive for it and challenge yourself. Running is challenging.”

This month was probably even more challenging than Johnigan expected it to be.  Instead of worrying about sectionals, which start across the state on Friday, she found herself sitting out critical parts of track season due to injuries sustained in a car wreck.

Johnigan missed about two weeks, including a meet at Calhoun High School.

“The air bag hit my face and when it hit my face it damaged some of the cells in my eye and I couldn’t see out of my right eye,” Johnigan said.

After using eye drops for several weeks, she recovered. Johnigan’s next goal was to regain her speed.

On her first day back running, she knew it was going to be difficult.

Not surprisingly, her times were slower than she would’ve liked.

A lot of Johnigan’s toughest workouts are on weekends.

She said after she was cleared to practice again she ran from Dollar General to her house and back over and over and also raced her brothers. In the end, all of that extra work paid off.

“To see what she’s been doing to get back has been great. She’s been running on her own at home. Out here [at practice] she has been driving a little harder,” said Keith coach Clifton Reeves.

“She’s actually putting in the work to get better. I love to see that as a coach.”

Reeves said he’s confident Johnigan can run track at the next level. He said she has the grades and has shown the commitment to make it happen.

Johnigan said she plans to become a registered nurse and has considered joining the military.

First, she’s determined to make a name for herself on the track.

If she runs well, she will qualify for the track and field championships for the fourth straight year. Last year she missed the finals due to Keith’s prom, but this time she’s planning to compete.

She knows this is her last chance to win a gold medal at the high school level.

“My goal is to dominate in all my events and to beat my times from years before,” Johnigan said.

She said she’d like to run close to one minute flat in the 400-meter and to threaten the 20-second mark in the 200-meter dash.