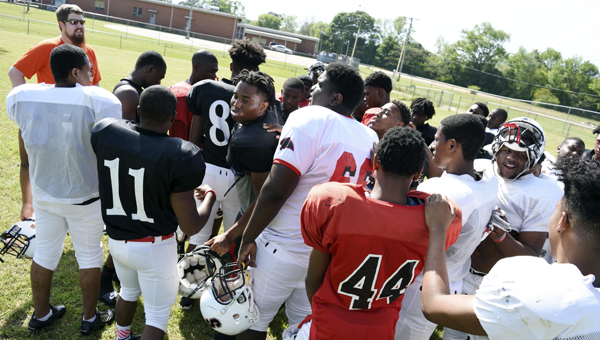 Above, Southside football players huddle during a spring training practice last week. Under a new AHSAA rule change, both sports will have extra time for competition during the summer. –File Photo

Earlier this month, the Alabama High School Athletic Association announced a list of changes that affect how high school athletic programs will approach their offseason.

One of the changes allows unlimited competition during a three-week period of the summer, while another allows teams to hold organized instruction in the offseason during the school year in groups not exceeding 50 percent of the players.

Dallas County High School head football coach Marty Smith says the two aforementioned rules give bigger schools with larger coaching staffs another advantage over smaller schools like the ones in the Black Belt.

“It is going to change things drastically for everybody involved,” Smith said.

Keith athletic director and basketball head coach Tommy Tisdale sees the positive effects the rule changes will have on his basketball team.

Each summer, Keith and Selma partner to host a statewide basketball competition. Now, Tisdale said he can host more than one if he wants to and can take his teams to multiple locations throughout that three-week period.

“If they’re not on coinciding dates, then I can go to as many as we can afford. That’s huge,” Tisdale said.

Tisdale said many states around the southeast have already adopted many of the rules the AHSAA approved earlier this month. He said it was time for Alabama to take that next step forward in developing all sports.

The Keith boys’ basketball team will have a few new players with some of its starters graduating in the spring, and Tisdale is planning on challenging next year’s team during the summer.

“We’re going to put them to the test early,” Tisdale said.

Tisdale is also excited about the rule that takes effect when Keith’s school year starts up again in the fall. In the past, Tisdale wasn’t allowed to coach his basketball team in the offseason portion of the school year, so he had to make sure his players were still getting the necessary instruction elsewhere.

With new rules in place, coaches are able coach 50 percent of their players at a time, which means Tisdale can coach his guards one day and forwards the following day.

“I can get this timed rotation to where we can get individual work done, and I won’t have to worry about players going around Selma for training or going with an AAU coach,” Tisdale said.

Southside head football coach Daniel Flowers is looking forward to the added time on the field during the summer so that he can figure out who his starting quarterback will be for next season. But like Tisdale, he will be wary of overworking his players with all an unlimited time limit.

“Sometimes you can wear the kids down,” Flowers said. “You’ve got to be careful you don’t wear them out before the season starts.”

While both Flowers and Tisdale see more positives than negatives in the AHSAA’s new rules, Smith said the rules will challenge his football team to keep pace with many of its competitors.

“Where does it stop? Because here’s the thing, you can never go back,” Smith said.

“Once you open the door, you can never go back. So the question I have is, at what cost?”