Smith takes over as Rural’s CEO 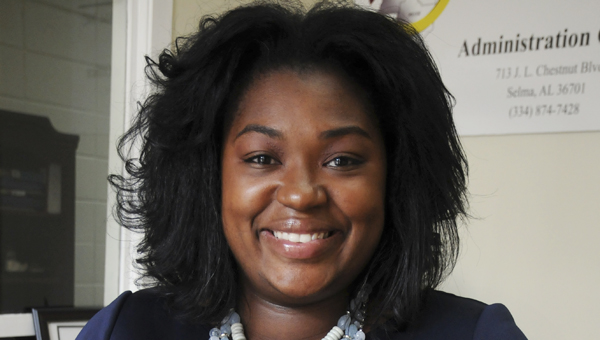 Selma native Keshee D. Smith has spent her entire college and professional career developing skills to give back to the community she loves. Now as the new chief executive director of the Rural Health Medical Program, Inc., she has been given the opportunity she had been searching for.

She is the daughter of Ira R. Dozier-Stallworth, Don Stallworth and Anthony Jordan. She is married to Tavarius Smith. The couple have three children; Tavarius Jr., Kahlan and Khariyah.

In 2004, she graduated from Selma High School.

Smith attended Spelman College in Atlanta where she obtained a bachelor’s of arts degree in economics with a minor in management in 2008. During her time there, she was involved with the Bonner Foundation, a community service scholarship program, and INROADS, a bridge for underprivileged youth to corporate internships.

Between those two programs, she discovered a calling for community advocacy and developed skills needed to be successful.

“I learned about being involved in the community and how I wanted to continue to grow that after leaving school,” Smith said. “I was able to network and meet people and see my potential in different areas to figure out which way I wanted to go.”

In her senior year, she was an intern for Accenture, a global consulting company, where she later accepted a job as a communications specialist upon graduation.

Smith said during her internship, she learned how a consulting company worked.

“I learned that it was organization that came into a company and worked behind the scenes to help keep that company functioning,” she said. “I wondered, ‘How can you do that with a community aspect?’”

After accepting the job, Smith said she was on a plane nearly every week for five years.  During her time with Accenture, she relocated to places such as Pittsburgh, Chicago, Washington DC and Houston. Each location she did a different job, giving her experience in training development, communication development, human resource management, community engagement and others.

She reconnected with her high school sweetheart, Tavarius, while in Houston. The two got married and started a family.

Smith said the responsibilities of being a parent temporarily deterred from her professional dreams, but knew that was only a detour.

“When you miss opportunities to go back and do the work that you’re supposed to do in your life, the opportunity comes back around eventually,” she said.

In May 2014, Smith founded the Black Belt Community Development Coalition, a nonprofit agency providing services such as learning management, career development and others.

She said the nonprofit was inspired by her experiences as a child with a parent who suffered from substance abuse and who was constantly in and out of prison.

“He had a sickness and at the time there were no recourses to truly help a family navigate in that area,” Smith said.

The nonprofit was designed to provide recourses for individuals who needed assistance reentering the community as a sober, contributing member of society.

“There’s a process you have to go through to reenter a community,” Smith said.

She and her family would soon experience a sense of this transition.

In May 2015, the family had the opportunity to relocate. They purchased and renovated a home in Selma; beginning their transition back into a community they had been separated from for many years.

After settling into their new home, Smith saw a job posting in Times-Journal for a CEO position at Rural Health Medical Center, Inc.

“I remember as a young girl going to the clinic in Uniontown in Rural Health. I remember that I did not even know that there were other locations throughout the Black Belt region and how far stretched this organization had grown and developed,” she said. “I knew I had experience in people development, communications, training, HR and I knew what I was trying to do with my organization. I said, ‘this is where I feel I should be.’”

She applied and was offered the job. She has only been in office for four weeks but already sees opportunities for the organization.

Smith said her mission is to rebrand the medical program to return to its previous status of the ‘go-to’ location for primary and preventive for residents. She also hopes to reestablish connections with other local health agencies and local businesses to better provide for the community.