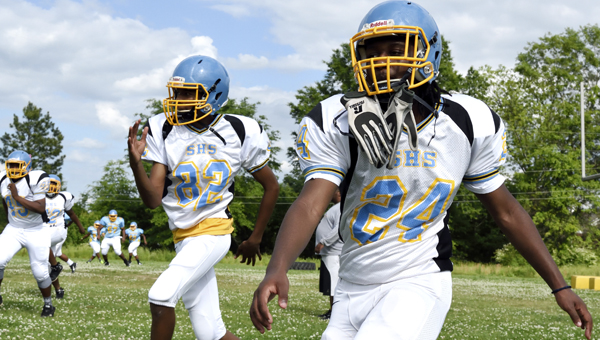 Selma High School opened football practice Tuesday with acting head coach Reggie Glover at the helm. Glover, a Selma High School graduate who has coached at the school the last eight years, has been leading the team since former coach Leroy Miles stepped down in February.

Selma City Schools Superintendent Angela Mangum said last week that she expects the school board will approve a new football coach, boys’ basketball coach and athletic director on May 10, which is before the end of spring practice. Selma is scheduled to play a spring game against Robert E. Lee in Montgomery on May 13.

“I’ve told them as of right now — and this was really the mindset we’ve had since coach Miles announced to them that he was taking another job and I would be acting as head coach — I told them that’s what we’re rolling with,” Glover said. “You don’t want to limit yourself and then turn around and I am the head coach because then you have wasted time. We’re coaching as if this is the staff for next year.”

“Today is our fundamental day, just trying to get to the basics and not assume any of the players know the basics, even the returning players,” Glover said. “We just want to get back to the basics.”

There were about 60 Selma players dressed for Tuesday’s practice and another 15 upcoming ninth graders watching practice.

Most of those watching had just finished another sport and had not had a chance to have a physical performed, Glover said.

Tuesday’s practice was more about seeing what the players could do. Glover said later in the week Selma will focus more on adding in plays to get ready for the spring game.

“It’s going to be real basic and even through the years when coach [Miles] was here, we tried to keep it basic and narrow down the offense to a few running plays and a few passing plays and see how well we could learn those plays,” Glover said.