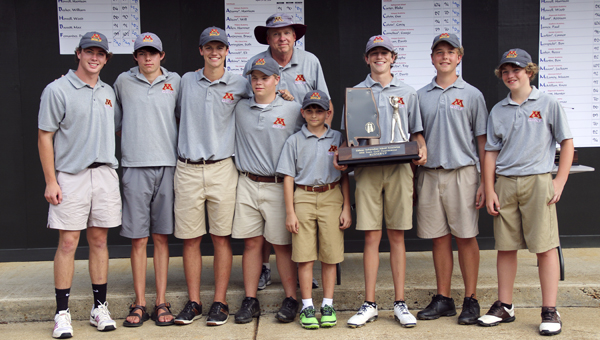 The future looks bright for the Morgan Academy golf team.

The Senators finished as runner-up to Lee-Scott at the Alabama Independent School Association’s state championship Tuesday in Greenville at Cambrian Ridge Golf Course. Morgan finished with a team score of 658, or 82-over par, and had a 20-shot advantage on third place Edgewood Academy.

“They all played better today than they did yesterday and they had a lot of other teams rooting for them,” said Morgan golf coach Ira Wagoner.

The Senators are one of the youngest teams in the AISA and Wagoner said that helped them become a fan favorite. Sam Brackin, a sophomore, was the oldest player whose score factored into Morgan’s final team total. The others were seventh grader Jones Free, eighth graders Gus Colvin and Thomas Morris and ninth grader David Cothran.

Lee-Scott Academy was the prohibitive favorite when the tournament started and didn’t disappoint. The Warriors shot a team score of 4-under par and won the tournament by 86 shots overall over Morgan Academy.

Lee-Scott was led by Turk Pettit, who shot a two-day total of 15-under par. Pettit followed Monday’s opening round 64 with a 65. Both scores were the lowest of the tournament.

“There were two different golf tournaments going on obviously. Lee-Scott was going to win and there wasn’t any disputing that when we teed off the first day,” Wagoner said.

Lee-Scott’s David Thompson finished in second in the individual competition, ten shots behind Pettit. Morris finished sixth after backing up a first round 76 with a second round 75. Morris, who was selected to the AISA’s all-tournament team, had an eagle Tuesday on the par-5 seventh hole. Free jumped into a tie for twelfth after a 77 that left him at 14-over par. After not making a single birdie during round one, Free made four during Tuesday’s round.

Nearly every Senators player in the field lowered their score in round two.

Birdies at holes eight and nine helped Colvin follow up Monday’s 87 with a second round 78. He finished 17th overall. Brackin finished 38th after shooting 91 to beat his first day total by two shots. David Cothran went six shots lower with a 96 and finished 55th. Morgan Academy’s Jackson Pearce, who finished 59th, and Will Alison, who finished 66th, bettered their first day scores by 15 shots apiece.

Morgan senior Harrison Adams also played well on day two, shooting a second round 96 to finish in a tie for 44th.

“After yesterday’s round, they were all very disappointed,” Wagoner said. “They all came to me yesterday afternoon and wanted to go back to the course and practice. They went early this morning to practice again. They were determined to do better.”

The Senators entered Tuesday with a three shot lead in the battle for second place. They ended up turning the tournament into a battle for third. Edgewood Academy was third after a two day total of 102-over par, Tuscaloosa Academy was fourth at 113-over and Glenwood School was fifth at 120-over.