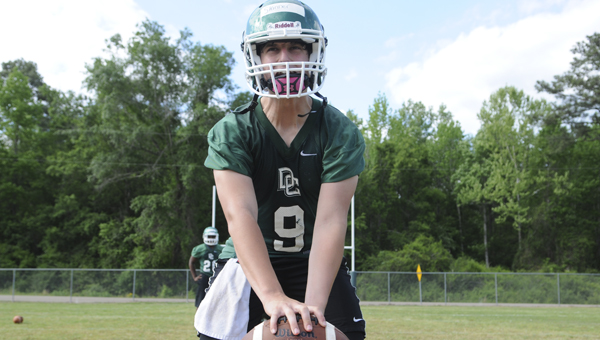 PLANTERSVILLE — It’s only the first week of spring training, but Dallas County High School head football coach Marty Smith isn’t letting his team get off easy with missed assignments and dropped balls. The Hornets will be challenged this season, and Smith is going to make sure early on that his team is ready for that challenge.

“When we travel to McAdory, we’re either going to get embarrassed, or we’re going to go up there and make a name for ourselves,” Smith said.

An opening season game against class 6A McAdory is just part of a schedule that will test Dallas County every step of the way. Last season, the Hornets turned their bad luck around, finishing with a winning season and a trip to the class 5A playoffs.

This season, a team comprised of mostly returning players will try to make another run in a familiar region.

The 2016 reclassification didn’t affect Dallas County as much as others, as the Hornets only saw two teams leave class 5A, region 4 and one team enter. Helena and Wilcox Central are gone from the region and Marbury fills the void.

The gap left by the departing seniors on the Dallas County football team isn’t too large, but there are still questions to be answered at multiple positions through spring training.

The biggest question mark is who will be the starting quarterback to replace senior Lane Wallace. On Tuesday, Hunter Skinner, Hunter Myers and Josiah Barnett all took snaps at quarterback, with Skinner commanding first-team reps.

Skinner was the team’s backup last season, Barnett started for the junior varsity team and Myers played quarterback two seasons ago for the varsity team but did not play last year. Smith said Skinner’s experience playing catcher for the varsity baseball team this past season helped him become someone who could be a leader on the football field.

“He’s the type of kid who goes to the line of scrimmage, and he knows who should be blocking who on every single play,” Smith said.

The only other starter Dallas County will lose on the offensive side of the ball is wide receiver Willie Lofton.

On defense, the Hornets will have to replace two starting linebackers. Smith said Kenchavious James and Kendrick Howard, who both played on the defensive line last season, will each get a chance to compete for linebacker positions during spring practices.

“It’s going to be an opportunity. That linebacking corps could end up being better than last year’s,” Smith said.

“They’ve got to continue to improve, but the defensive line has got to control the line of scrimmage.”

The defensive backfield loses Anthony Oliver, but there is still experience in the secondary with the return of Quincy Parker and Kedrick Wilson. Smith said Parker could also be in the mix to play quarterback this season, but Parker wasn’t taking quarterback reps during Tuesday’s practice.

Dallas County isn’t losing too much experience, but with a schedule that should challenge the Hornets from start to finish, Smith knows his players need to be focused from the first week of spring training if they want to enjoy a repeat trip to the playoffs.

“Set the bar, put the challenge out there for us, go out there and play it and see where you line up,” Smith said.

Dallas County will play its spring game May 7 at 6 p.m. at West Blocton.