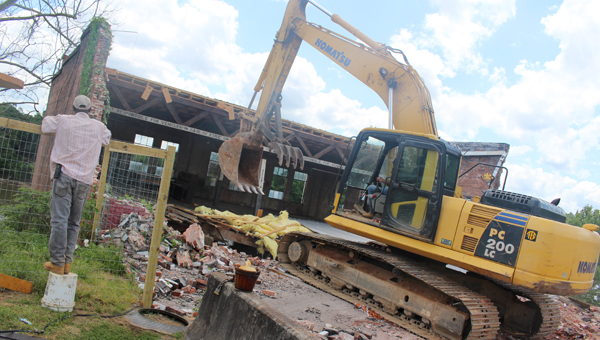 Demolition of the old Safelite building on Water Avenue started Monday morning. The building’s roof partially collapsed April 13 after a line of thunderstorms moved through the area.

Less than two weeks after the roof of the old Safelite building on Water Avenue collapsed, the entire building is being torn down.

Crews started working Monday morning to bring down the rest of the building. The roof and part of a wall fell April 13 after a line of thunderstorms passed through the area.

Blue Jean Church has owned the building about a year. Church leaders haven’t decided what to do with the property but hope it can be used to improve downtown.

“That’s why we want to keep the property. That’s why we haven’t sold it,” said Dane Shaw, a member of Blue Jean’s Vision Team. “We want to make sure it’s used for the right purposes for that whole block.”

Shaw is also president of the nearby Arsenal Place Accelerator, a business incubator for startup companies and entrepreneurs.

“We want to use it to further enhance the economic development of the city,” Shaw said.

The loss of the building might be a blessing in disguise. Estimates to renovate the building range from $800,000 to $1 million. River erosion has threatened the building for several months.

“We see it as a positive,” Shaw said. “It was a good building, but once it got comprised, it was a done deal.”

Shaw said the property could be used for something like a boat or canoe ramp or even house a business or restaurant at some point. The bank has been secured with riprap and filters.

“Right now, it’s shored up. Rocks and filters will keep the bank from eroding,” Shaw said. “You could move riprap pretty easily and build on it.”

A $242,000 city project to repair river erosion and damaged storm drains at the intersection of Water Avenue and Church Street continues.

“They’re working now. I’m sure the weather has slowed them down, but they are working now as soon as they can,” said Councilman Greg Bjelke earlier this month. “We’ll just have to do the best we can. Maybe something good will come out of this.”

REV Construction, Inc. out of Tuscaloosa won the bid for the project. The same company replaced the drains underneath Lauderdale Street from the courthouse to the Bienville Monument last year.