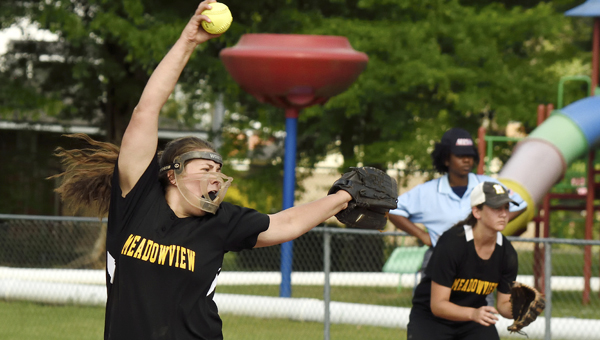 The Meadowview Christian softball team is headed back to the Alabama Christian Athletic Association playoffs.

Behind two impressive performances by junior Shelby Boswell, the Trojans throttled Victory Christian from Columbus, Mississippi 11-1 and 16-0. The wins locked up a postseason berth for Meadowview. The Trojans will take part in a sub-state game next week, although the opponent and site of the game is not yet known.

“It feels good to go from what we’ve been doing all season to actually doing what we’re supposed to do,” said Meadowview coach Cherie Grimes.

It’s been an up and down year for Meadowview, but the Trojans played some of their best softball of the year Monday, with the season on the line.

Boswell pitched eight innings and gave up only one run, but her biggest contribution was at the plate. She hit a home run over the left field wall in game one to give Meadowview a 2-0 lead.

In the second contest, she hit a bases clearing double that extended the Trojans’ advantage to 12.

“I wasn’t really looking to hit a home run,” Boswell said. “I was just looking to put the ball in play and sometimes it just happens.”

The home run was Boswell’s first of the year, but she’s not the only Trojans’ player that has picked its game up in the last few weeks. Grimes said the team is looking more comfortable playing together.

Meadowview, the defending state runner-ups, might be peaking at the right time, Grimes said.

“It just so happens to be at the end of the season, when it counts.”

In game one, Mallory Freine scored on a Kalee Jones groundout in the first inning to put Meadowview up 1-0. Boswell’s homer tacked on another run in the first to give the Trojans a two-run lead.

In the second inning, the Trojans took control of the game. Emily Skelton singled to bring Alyssa Verhoff home for the first run of the inning. Freine kept the momentum going by doubling to right field to score Kameren Burton.

Jones singled to score Skelton and Freine to give the Trojans a 6-0 lead. Christina Dabit, who came in to pitch the final two innings of the second game, finished the scoring with a double to bring in Jones. At that point, it was 7-0 Meadowview.

Burton and Skelton singled in the third inning to bring in two more runs for Meadowview. Skelton also scored the final run of the game when she ran home on a passed ball in the fifth inning.

In the second contest, Boswell’s 3 RBI double extended Meadowview’s lead to 12-0 in the third inning.

After Dabit and Verhoff were hit by pitches and walked, Rylee Stewart hit a single to score two runs to give Meadowview a 14-0 lead.

“We did well last year going to state and we plan on doing it again,” Grimes said.