Battle of Selma has its 151st re-enactment 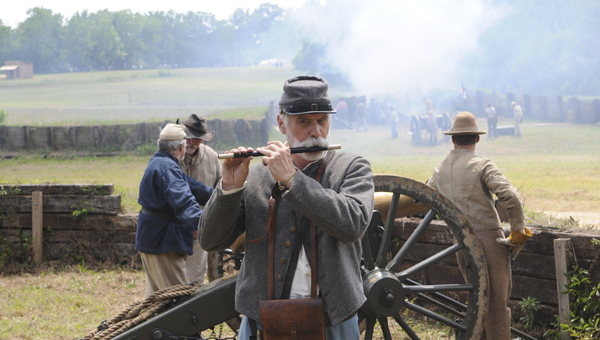 The 151st Battle of Selma went out with a bang.

On Sunday, the Battle of Selma came to an end with a morning memorial service at Old Live Oak Cemetery and a re-enactment of the battle in the afternoon at Battlefield Park. To no surprise, the Union emerged victorious over the Confederacy.

With cannons firing from one end of the park to the other throughout the battle, spectator Ann Jowers had no hesitation about stating her favorite part of the re-enactment.

“The artillery,” Jowers said with a laugh. “The cannon firing, and just that they try so hard to make it realistic.”

Battle of Selma from The Selma Times-Journal on Vimeo.

Jowers, who lives in Selma, came to the battle to watch her son, Martin Jowers, preserving history, something he has always been passionate about.

One of the re-enactors who shares the same passion is Jeff Grzelak, an Orlando, Florida, native who has been re-enacting battles for the last 42 years. Grzelak, who portrayed the role of a Union commander, has re-enacted around 1,000 battles from all over the country, but he said there is something special in getting the opportunity to re-enact the Battle of Selma.

“The site is beautiful. The town is very friendly. The public is just fantastic. The site lends itself very well to what we do and you can see it all,” Grzelak said.

Grzelak described the Battlefield Park as a natural amphitheater, as hundreds of spectators were able to gather and get a complete view of the battle re-enactment on the hillside.

Grzelak also said Selma stands out because the battle is re-enacted on the site it was fought in, which isn’t always the case.

“Fighting on an original battlefield is a great honor for us because we are honoring the men both blue and gray who fought back then, and when we can do it on the original site close to the original date, it’s really very special for us personally,” Grzelak said.

Plenty of parents brought their children along to the battle, which Grzelak enjoyed seeing. He believes today’s youth can learn a lesson from watching battle re-enactments.

“It is a good living history example for the kids today because unfortunately the schools miss out on a lot,” Grzelak said. “They concentrate a lot more on modern history than what happened 155 years ago.”

Throughout the day, the Fifth Alabama Infantry Regiment Band from Tuscaloosa provided musical accompaniment to help bring people back in time to the Civil War era.

Band president and trombone player Henry Jackson had nothing but good things to say about his band’s experience playing during the Battle of Selma weekend.

“It’s always fun to play at Selma. People are great,” Jackson said. “The battle is always on a great site. Great people doing it, and it’s just been a wonderful weekend for us.”

Jackson had a front row seat to the end of the 151st Battle of Selma re-enactment, as the last of the Confederate soldiers fell at the feet of the band.

“It’s always fun to be in the middle of it,” Jackson said.

While the outcome of the battle re-enactment was never in doubt, the frequent blasting of the cannons, a burning house and the care all the re-enactors put into playing their part made it a show worth watching.

“I’ve been to other [re-enactments], but this one is still the best,” Ann said.