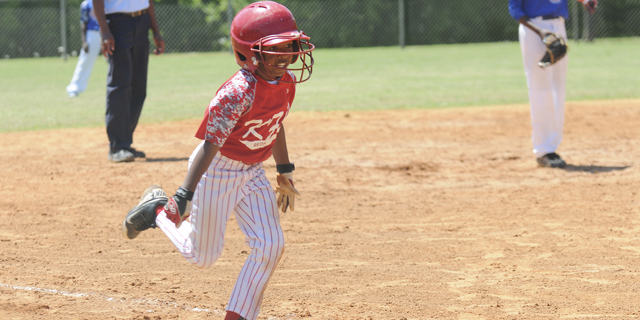 Byron Oliver of the KFC Reds sprints home for the final run to end the game in a walk-off over the Frazer Group Cubs. Jalen Williams had the game-winning hit that brought Oliver home. — Justin Fedich

Nine-year-old Jalen Williams is playing his first year of baseball, and came into Saturday’s game looking for his first hit.

On the last pitch of the game, Williams got his hit, an RBI that gave the KFC Reds a walk-off victory.

The KFC Reds won a close game against the Frazer Group Cubs 5-3 in four innings in the 9-and 10-year-old youth baseball league Saturday at the Sportsplex.

KFC Reds head coach Andre Lamar said he is constantly reminding his players to enjoy themselves while they’re playing and not feel pressure.

“You’re 9 years old, 10 years old, you’re supposed to be having fun. There should be no pressure, so just go out there and play baseball,” Lamar said.

The Reds took a 2-1 lead early in the game, leaving the Cubs to play catch-up. Marquarius Reese pitched the first few innings for the Cubs, and he was relieved by Jack Whiddon in the bottom of the second inning. When Whiddon took over, Byron Oliver stood on third base for the Reds and Williams was on second base. Whiddon managed to strike out a batter to avoid allowing any runs to score.

“You can count on [Whiddon] and depend on him to play any position,” said Cubs head coach Bob Frazer.

JaTavious McGraw took over at pitcher for the Reds in the top of the third inning. The Cubs loaded the bases with one out. The next Cubs batter, Ronnie Leshore Jr., hit a grounder to McGraw who threw out Aiden Foley at home. Whiddon flew out to end a scoreless inning for the Cubs.

The Reds extended the lead to 3-1 in the bottom of the third inning when Joshua Davis III hit an RBI double. Whiddon recorded two strikeouts in the inning, but walked Javarius Marks to load the bases with two outs. Reese snagged a line drive at shortstop to end the inning for the Cubs.

“MJ [Reese] is a great talent. MJ has got instincts that you can’t coach. He plays hard, and he has an incredible will to win,” Frazer said.

Tyshawn McGuire replaced McGraw at the mound in the top of the fourth inning for the Reds. The Cubs needed two runs in the inning to tie the game. They got one when a bad exchange between catcher and pitcher brought home Jalen Prince to cut the Reds lead to 3-2.

Next up, Reese stepped to the plate. With a 1-2 count, Frazer told Reese he needs to swing at the next pitch if it looked in. Reese held strong, watching the following two pitches land above the strike zone.

On the next pitch, Reese took aim at the gap between center field and right field and delivered. Reese’s triple sent home Frederick Gilmore to knot the score at 3-3.

McGuire caught two fly balls at the pitcher’s mound to end the inning with the score tied.

In the dugout, Lamar refocused his team.

“Keep the composure. Stay in the game, and just pay attention to what you’re doing, and you’ll be fine,” Lamar said.

Barron Frazer entered the game at pitcher for the Cubs in the bottom of the fourth inning. Tristin Blocton drew a walk from Frazer, and he advanced to third base after a couple pitches got away from the catcher. Oliver got on base, and next, it was Williams’ turn to take the plate. Williams connected, sending Blocton and Oliver home and ending the game with a walk-off hit.

Lamar said most of his players have been playing together since they were 5 years old, but this season has been a learning process for Williams in his first year playing baseball.

With the KFC Reds winning in walk-off fashion, Lamar said it taught his players that anything is possible.