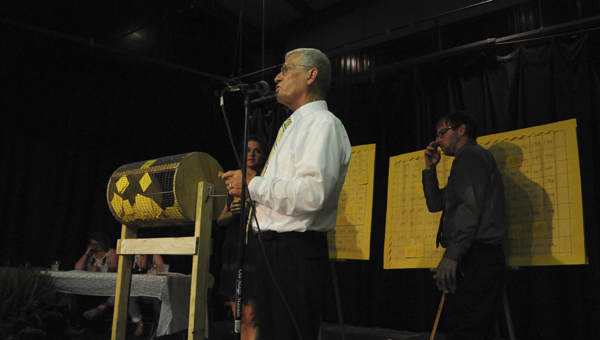 On his right hand, he showed off a 1957 Auburn national championship ring he won as a player.

He picked up his left hand and displayed one of his five Meadowview Christian state championship rings he earned as head coach of the Trojans football team.

“I was lucky enough to play on that championship team in 1957, but I am much prouder of the Meadowview ring,” Wasden said. 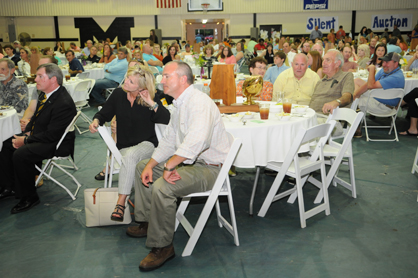 Meadowview students and faculty helped welcome hundreds of Meadowview alumni back to Meadowview Christian Saturday night as the school celebrated the 45th anniversary of its first graduating class.

Darren McGilberry, who serves as the president of the Trojan Pride Club, said he spent about three months preparing for this event.

Nearly every one of the 300 tickets were sold, and McGilberry even said he had to order 50 extra steaks last minute to compensate for all the people who bought their tickets last minute.

Throughout the night, Meadowview held a ticket drawing in which all 300 tickets were drawn for the possibility of cash prizes.

The last ticket drawn won $10,000, unless the final five tickets remaining each desired to split the money.

In that case, the people who owned the last five tickets would split the money to each receive $2,000.

There was also a silent auction as well as raffle ticket drawings.

McGilberry said the event was an effort to get the Meadowview alumni more involved and keep their support in the school.

He said students at Meadowview were serving the food so that the alumni could see the faces of the students they’re supporting.

McGilberry said the school is looking for financial support with academics and athletic equipment and every contribution from alumni helps.

He is hoping this event gives the school some ideas of what to do for the 50th anniversary a few years down the road.

“It’s a snowball effect. When we get all this going on, it’s just going to be better and better every year,” McGilberry said.

Steve Johnson, president of Meadowview’s board of directors, said he was glad to see attendees from Meadowview’s first graduating class.

He hopes the support Meadowview received Friday will continue into future years.

“We appreciate all the extra interest that we’ve gotten about coming to the school now,” Johnson said.

He was followed by Tommy, a Meadowview legend in his own right. Tommy said, much like his father, he will always value his experience as a Meadowview Christian Trojan.

“I’m not embarrassed to be from Selma, Alabama, and I’m proud that I finished high school at Meadowview Christian,” Tommy said.

For more photos from the Founders’ Day event, see Tuesday’s edition of The Selma Times-Journal.