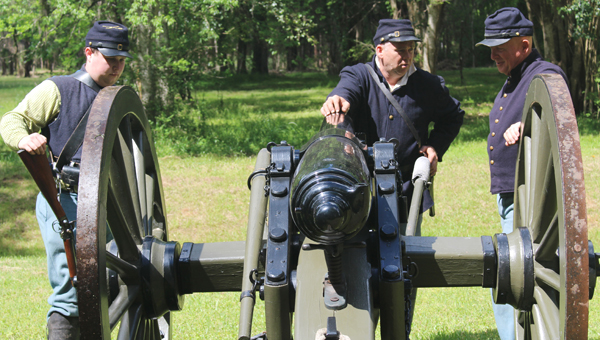 Civil War re-enactors prepare to fire a cannon at a service to honor soldiers Friday at Old Cahawba Archaeological Park. The site housed Castle Morgan, a Union prisoner of war camp in the 1860s. The prison had the highest survival rate of all Civil War POW camps.

About 30 people attended the service, which was held for the first time in 2015. Re-enactors from the Battle of Selma led the group in prayer and performed a gun salute and fired a cannon.

“It’s always great to come out and honor soldiers. It doesn’t matter if they were fighting for the North or the South. They were mostly 18-year-old boys during what they were told to do,” re-enactor and Tuscaloosa resident Robert Beams said. “I think my ancestors and their ancestors would be proud of what we come out here to do.”

Re-enactors who participated in the program came from as close by as Selma and as far away as Missouri.

The program was added last year as a way to tie-in Old Cahawba’s history and the Battle of Selma weekend.

“I was down here one day a couple of years ago, and I thought about the people who were here and tried to visualize them. I tried to think about what their life must have been like and then I went home and saw something about the Battle of Selma reenactment and I said, ‘Well there’s got to be a connection’ and realized the connection was these Union prisoners of war that were here,” said Buddy Perkins, who serves on Cahawba Advisory Committee. “I thought what better could we do than to have these people come down from the reenactment and honor the men who served and died here.”

Old Cahawba site director Linda Derry also spoke about the history of the now ghost town and its role in the Civil War.

The town of Cahawba housed Castle Morgan, a prisoner of war camp that housed as many as 3,000 Union soldiers by March 1865. Despite cramped conditions, the prison had the lowest death rate of any Civil War prison camp.

“It was noted that the prisoners from Cahawba were the healthiest of them all. So if you had a choice during that war, you would pick Cahawba,” Derry said.

It’s estimated 125 soldiers died at the prison, mostly from disease though at least 12 were shot.

As the war was ending, many of the prisoners started to make their way home. Most traveled to Vicksburg, Mississippi and boarded the ill-fate Sultana. The steamboat sunk after three of its four boilers exploded on April 27, 1865. An estimated 1,800 of the ship’s 2,427 passengers, many Union soldiers going home, died in the greatest maritime disaster in United States history.

“Let’s take a minute to imagine what it was like for those men. You had survived the bloodiest war in U.S. history. You had survived the prison of war experience,” Derry said. “You had written home to your mothers, wives, children that you were coming home. You were really looking forward to the end of this horrible experience and away they go.”

After the war, many of the bodies of POWs who died at Castle Morgan were to Montgomery and then Marietta National Cemetery in Georgia.

However, at least one grave remains, the Unknown Soldier, who was discovered in the 1960s. However, the soldier may not remain unknown forever.

Derry believes the grave belongs to Major Hiran Solon Hanchett, who was not released from Castle Morgan because he tried to lead an unsuccessful escape and some believed to be a spy.

After the other soldiers were sent to Vicksburg, Hanchett was moved to the county jail and was killed by Confederate soldiers after Selma fell. His body was never found.

Old Cahawba has received grant money to perform ground-penetrating radar and investigate the area. The park will also conduct DNA testing to hopefully identify the remains and return them to descendants.