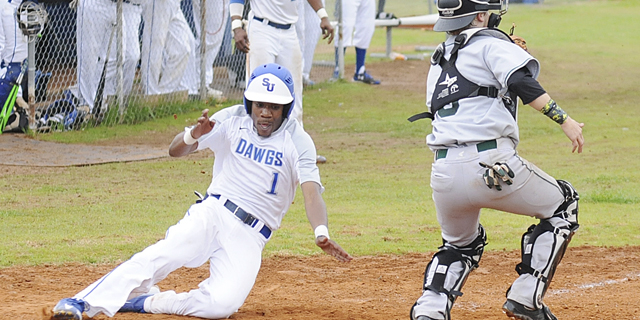 Selma University’s Daryl Watkins slides home in a game on March 11 against Concordia College Alabama. The Bulldogs are 24-8 and nearing the end of the regular season. On May 25, they will play in the National Christian Collegiate Athletic Association World Series in Mason, Ohio.

The Selma University baseball team (24-8) is entering the stretch run of its season with a chance to win two national championships.

The Bulldogs’ goal each year is to win the National Christian Collegiate Athletic Association World Series, which will take place in Mason, Ohio, on May 25-28, but if things fall the right way they could win a second trophy as well.

They’ll also get the chance to claim a title handed out by BlackCollegeNines.com, an independent blog that covers historic black colleges and universities. Each year the website hands out two national championships — one for a large HBCU and one for a small HBCU. Selma University is currently ranked No. 3 in the BlackCollegeNines small school division poll.

“We are just trying to finish strong so we can go into the tournament with a high seeding,” said Selma University coach Adrian Holloway.

The Bulldogs are in the midst of a layoff due to a scheduling quirk. They haven’t played since winning two games over Vorhees College on April 10. Scheduled games since against the University of Mobile and Clark-Atlanta were cancelled, and Lane College chose to forfeit contests originally lined up for this week.

Holloway said the team is treating the layoff just like it would a normal week.

“We keep everything as close to game speed as we can and work on fundamentals,” Holloway said. “Just trying to keep a rhythm going.”

It’s not surprising the Bulldogs wouldn’t want to change their routine, considering they lead the NCCAA in on-base percentage, triples and slugging percentage. Selma is also second in stolen bases and in runs scored per game.

Holloway said being aggressive on the base paths is key to the Bulldogs’ success.

“Being able to steal bases like that is key because it constantly puts runners in scoring position,” he said. “You can get a single if you’re at second base and the next pitch a guy can score. That helps generate runs and eventually adds up to Ws.”

Devon Pedro leads the Selma offense. He averages scoring over a run per game and .047 stolen bases per game— both which rank in the top 15 of the NCCAA.

Jose Duran and Tremaine Hopps are doing their part as well, leading the team in triples with four apiece.

Selma is ranked No. 20 in the NCCAA’s power ratings and is just outside the association’s latest baseball rankings. The Bulldogs received a vote to be ranked in the latest poll, which was released on Wednesday.

Regional play will take place in mid-May and will determine which teams get to take part in the NCCAA’s World Series. Each regional winner — east, central, Mideast, west, south, Midwest and north central will get an automatic bid. Three at-large bids will also be awarded.

Selma will play a doubleheader against Point University Tuesday in Georgia.