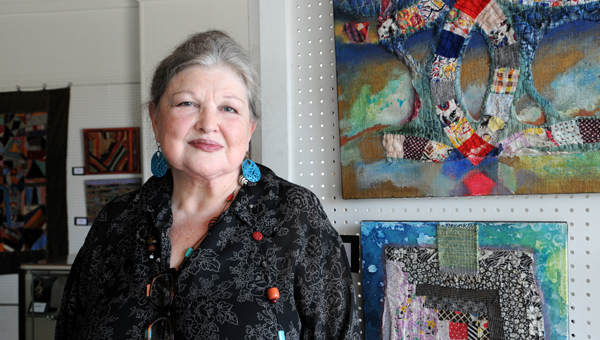 Local artist Anne Strand will be presenting her latest project, “Shattered Silk: An Airing of the Quilts,” on Thursday, April 28, at Gallery 905. The show will include 50 works featuring repurposed and reconstructed quilts.

A new exhibit featuring the works of local artist Anne Strand will open this week at Gallery 905.

The show, titled “Shattered Silk: An Airing of the Quilt,” will have an opening reception Thursday, April 28 from 5:30 to 7 p.m.

“It’s very new. I’ve never done anything like this before,” Strand said.

The exhibition will include 50 works varying in sizes and technique but have a common theme of antique quilts.

Known for her paintings, Strand studied at the New York Studio School and in Paris with abstract expressionist Elaine de Kooning, wife of the 20th century abstract expressionist Willem de Kooning. Her works can be found in numerous homes, businesses and institutions throughout the eastern United States and have been exhibited in places such as Columbus, Georgia, and Oxford, Mississippi.

In her works, Strand uses quilts from the late 19th and early 20th century. Some quilts had been transformed onto canvas and incorporate heavy texture and paint.

Others have been kept in quilt form, but include photo and paint patches where blocks have worn down from time such as “Looking Beyond.” The quilt is 68 inches by 70 inches, composed of corduroy, silk and cotton pieces, and hangs on the wall.

For Strand, this method of art is a means for her to preserve history in the quilts and bridge a connection to the present.

Strand’s daughter, A.C. Reeves, said her mother has experimented with multimedia in her paintings for the past 10-15 years but never to this extent.

Reeves was able to watch her mother’s new venture in a shared studio space on Broad Street.

“It’s been extra special to be in here and watch the evolution of these quilts,” Reeves said. “Quilts, they’re kind of the thing right now — especially in the Black Belt.”

The show is free and open for the public for viewing and will be available until Thursday, May 12.