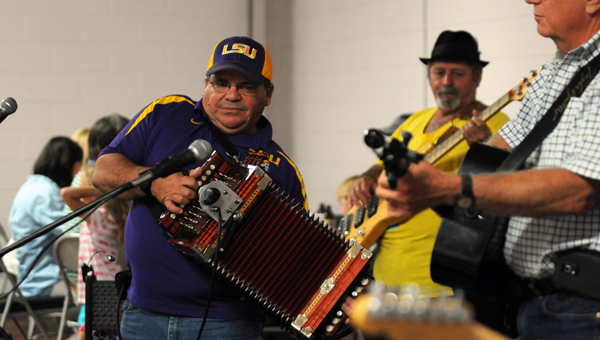 The Back Door Band vocalist and accordionist Glenn Douglas performs during the Low Country Boil.

The Old Depot Museum’s fourth-annual Low Country Boil was a success despite a last minute venue change from the threat of rain.

“I didn’t think everybody was going to show up. I really wanted it at the museum, just to get them to the museum, but I just had to make sure they were comfortable,” said museum curator Beth Spivey. “Everybody I’ve talked to said it’s fantastic. I haven’t seen anybody upset, and that’s good.”

Spivey said after getting the Old Depot set up just right for the event, she and helpers had to move everything to the George P. Evans Reception Hall at 3:45 p.m., nearly two hours before the event was planned to start.

But at the peak of the night, an estimated 450 people were in attendance.

“It’s a good time with good music, [and] it’s for a great cause to support the Old Depot,” said Katie Justice. “I am having a great time.” 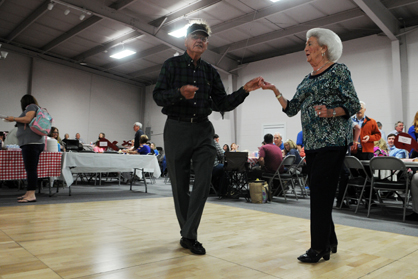 Spivey said it’s the biggest fundraiser for the Old Depot each year.

“We do really good with the Holiday House but this, everybody comes together just to have fun and that’s what Selma’s all about,” she said.

“The food is phenomenal. I’m talking it is the best thing I have ever put in my mouth,” said Wood Spivey.

This is the second year the family business has provided service to the event, but the first time they’ve provided food. Members of the business also play in a band called The Back Door Band, which made its first appearance last year at the boil.

“Especially when they ask to learn how to peel crawfish, it’s really fun,” she said.

Trahan said 900 pounds of crawfish were cooked for the event and made to fit everyone’s taste buds.

“It’s not spicy simply because we want everybody to be able to enjoy it,” she said.

Lanny Harrison has attended each event for the past four years. He said he comes back every year for the crawfish.

Individual tickets were sold for $25 per person. Eight-person sponsor tables were priced at $500 per table. Admission included bottomless crawfish and beverages. Desserts, corn, potatoes, popcorn and peanuts were also served.