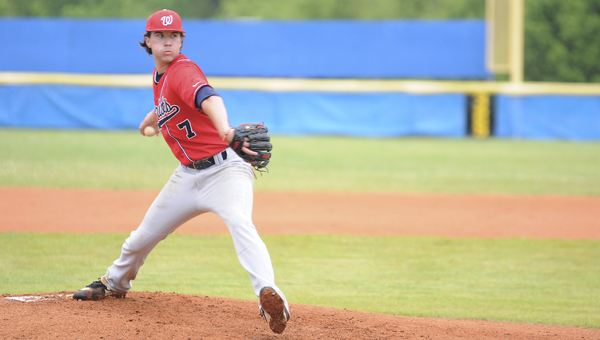 Wallace pitcher Stephen Mims throws a pitch in the second game of a doubleheader at home against Chattahoochee Valley Thursday. The Patriots lost the first game 10-2 and were trailing 15-2 in the second game before it was postponed due to weather. — Justin Fedich

Rain slowly soaked the Wallace Community College Selma baseball field, as Patriots head coach Frank Elliott peered down the bench of his dugout for a pitcher who could put a dreadful second inning to a close.

“You’ve got any strikes in you?” Elliott asked pitcher Chris Driskell.

Driskell headed toward the bullpen and a couple batters later, he was on the mound. Driskell succeeded in getting the third out, but not before the Chattahoochee Valley Community College Pirates scored 15 runs in the second inning.

“We’ve just got to come out and play better,” Elliott said.

In the second inning, Joseph Simonetti singled and Corey Lowe brought him home with a triple. Zack Seagle drove in Lowe to cut the Chattahoochee Valley lead in half, but that was the last run Wallace was able to score all game.

In the third inning, Campbell, Hughes and Willoughby all singled and scored. Campbell added another run in the fourth inning, and Nolan Greckel and Hill scored in the fifth inning off a Hill home run.

Elliott said part of the reason for his team’s struggles Thursday was a lack of depth at pitcher. He said four pitchers are out for the season, and his top two pitchers both sustained elbow injuries that ended their careers at Wallace.

In the second game, the Patriots’ challenges at the mound didn’t take long to become evident. In the first inning, starting pitcher Stephen Mims allowed one run, but Wallace took the lead in the bottom of the first inning, when Brondrick Johnson hit a two-run home run over the left field fence.

In the top of the second inning, Chatahoochee Valley took advantage of three different Wallace pitchers.

Greckel opened the inning with an RBI to drive home two runners and grab a 3-2 lead. After J.T. Thomas hit a triple that sent home Willoughby and Hughes to take a 9-2 lead, Mims was subbed out for pitcher Tyler Graham. Two wild pitches brought home a pair of Pirates runners, and Graham was replaced with Driskell.

Driskell escaped the inning, but not before allowing a grand slam by Chattahoochee Valley’s Tim Kennedy.

In the bottom of the second inning, Wallace was retired in three batters. The game was postponed after the inning ended, as the rain refused to let up. When the Patriots travel to Chattahoochee Valley Saturday, they have two-and-a-half games to play, starting with one that they’ll enter into with a 14-run deficit.