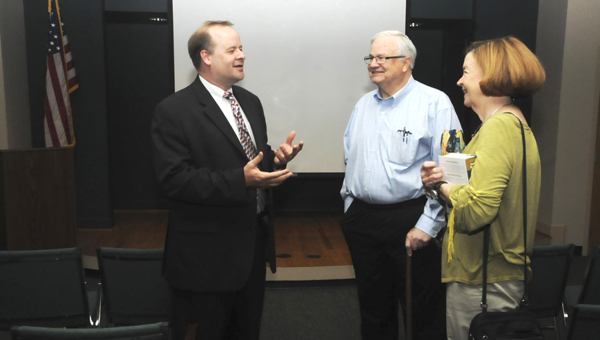 Jonathan Jordan talks to Ralph Hobbs and his wife Grace, who taught and inspired him to have a love for history, after a presentation on his latest book, “American Warlords: How Roosevelt’s High Command Led America To Victory In World War II” Thursday at the Selma and Dallas County Public Library.

Jonathan Jordan returned to Selma on Thursday to share his new book “American Warlords: How Roosevelt’s High Command Led America to Victory in World War II” with the community.

Library Director Becky Nichols said Jordan’s book is the last one to be featured at the Lunch at the Library Series for the spring.

“It is our monthly gathering where we converse over food, meet an author and hear about their book. People can buy a book if they would like,” Nichols said.

The Lunch at the Library series has been a regular program for the past 22 years in the fall and spring.

“We have been lucky to have authors from Alabama and other states to come here. This is a great event and brings people together,” Nichols said.

Guests got a chance to purchase “American Warlords” for $25. They ate salad, casserole, rolls and mini pecan pies while listening to a detailed presentation on the background of the book.

“If there is five minutes of talking and 30 minutes of answering questions and interacting with the audience, that is the most fun for me,” Jordan said.

Jordan moved to Selma when he was 10 after his dad got out of the Air Force. Jordan said it was the summers he spent at the library while growing up that gave him a passion for books and three teachers who shaped his love for history. They were Grace Hobbs, Florence Mooring and Herb McCreary.

“I enjoyed reading history magazines a lot. I eventually realized I could write something like the articles I saw. So, I began writing for different magazines, “ Jordan said.

He said after writing over 20 articles, he found his passion with longer books.

“When you start off writing, it’s like having a big block of marble, you know somewhere there is a statue inside of that marble. It can be very difficult to look at because at first, all I have is this rough conglomeration of facts,” Jordan said. “It’s hard not to get impatient. It can be drudgery at times but the satisfaction comes with fine tuning.”

Jerry Murry is a 90-year-old World War II veteran who attended the Lunch at the Library series Thursday.

“I think he does a great job. There needs to be more books like the ones he writes,” Murry said. “By doing this, younger people can read the history of the past and better the future.”

His book is a continuation of previous works, “Brothers, Rivals, Victors: Eisenhower, Patton, Bradley and the partnership that drove the allied conquest in Europe,” and “Lone Star Navy: Texas, the fight for the Gulf of Mexico and the shaping of the American west.”

Jordan graduated from Samford University in Birmingham, where he majored in business. He later went on to Vanderbilt University in Tennessee and studied law.

The 49-year-old now lives in Marietta, Georgia with his wife Kate and their three children Rachel, Emily and Austin. When he is not writing books, Jordan is a lawyer and assistant scoutmaster with the local Boy Scout troop.