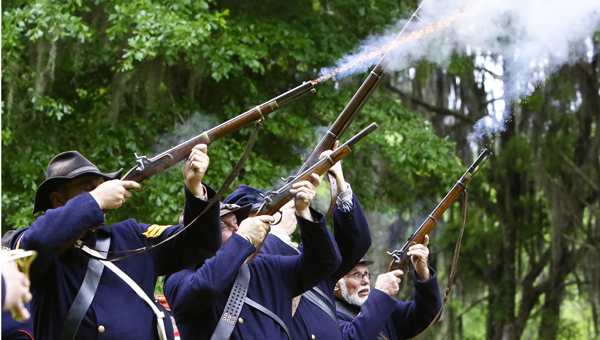 A service Friday at Old Cahawba Archaeological Park will honor Union and Confederate soldiers who died during the Civil War.

A program Friday at Old Cahawba Archaeological Park will honor those who paid the ultimate sacrifice during the Civil War.

Re-enactors will gather Friday at 3 p.m. to honor Union and Confederate soldiers who died. The program was first held last year.

“I think it’s a very nice gesture on their part to recognize the dead and the price both sides sustained during that war,” said Linda Derry, site director.

The program will include history on Old Cahawba, a gun salute and cannon firing.

Old Cahawba, which served as Alabama’s capital from 1820 to 1825, has a unique role in Civil War history. It housed Castle Morgan, a prisoner of war camp. Though only measuring 15,000 square feet, the prison housed 3,000 Union soldiers by March 1865. It’s estimated as many as 8,000 to 9,000 Union soldiers passed through Castle Morgan.

Despite the cramped conditions, the prison had the lowest death rate of any Civil War prison camp. It’s estimated 125 soldiers died at the prison. Many historians believe the low death rate was mainly due to the humane treatment of prisoners based on orders from commanding officer and Methodist minister H.A.H. Henderson.

In the waning days of the war, flooding pushed the waters of the Cahaba and Alabama rivers over their banks and across the town of Cahawba.

The rising water left more than 3,000 Union prisoners of war standing in knee-deep water for days.

When released a few weeks later, many of the prisoners started to make their way home. Many traveled to Vicksburg, Mississippi and boarded the ill-fated Sultana.

The steamboat sunk after three of its four boilers exploded on April 27, 1865. An estimated 1,800 of the ship’s 2,427 passengers died in the greatest maritime disaster in United States history.

Nearly all of the soldiers who died at Castle Morgan were later moved to other cemeteries across the country. Many are buried at Marietta National Cemetery.

However, at least one grave remains, the Unknown Soldier, and there may be more, according to Derry.

“It’s worth coming out for. It brings a tear to a lot of people’s eyes. It was son sincere,” Derry said. “It’s a time for quiet reflection.”

To reach Old Cahawba from Selma, take Highway 22 (Dallas Avenue) west for 8.6 miles. Cross over the Cahaba River and turn left onto County Road 9 and follow it 3.3 miles until it dead ends.

Then turn left onto County Road 2 and follow it for 1.5 miles until you see the welcome center on the right. The address is 9518 Cahaba Road, Orrville, AL 36767.