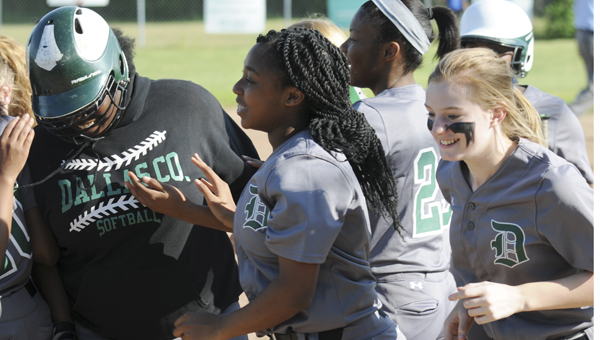 Dallas County players gather around Yasmeen Green, left, to celebrate her home run in the fourth inning of a home game against Demopolis Wednesday. Below, shortstop Keyondra Fletcher throws a ball to first base. — Justin Fedich

In the bottom of the fifth inning, the Dallas County Hornets loaded the bases and started to chip away at a six-run Demopolis Tigers lead. Dallas County couldn’t reduce the deficit completely, and the Hornets trailed by 13 runs midway through the sixth inning.

A late collapse doomed the Hornets (17-3) at home against the Tigers in a 16-4 loss. Dallas County head coach Willie Moore said there were plenty of factors that led to the blowout loss.

“We didn’t hit the ball well,” Moore said. “We had one inning where we had seven errors that led to five runs that broke the game open. Just routine stuff.”

With Tori Hatfield pitching for the Hornets, Demopolis opened up a 2-0 lead in the first inning. Hatfield held the Tigers scoreless in the second inning, but Dallas County wasn’t able to score either, leaving the score at 2-0.

“She’s our best hitter,” Moore said of Green. “She had a real good eye for the ball today.”

Moore said the difference in the game was that Dallas County wanted to win, but Demopolis expected to win. He is hoping that mentality shifts when the Hornets meet up with the Tigers in Demopolis for the area tournament.

“We’re going to do our best to readjust and refocus and see if we can give a better effort tomorrow,” Moore said.