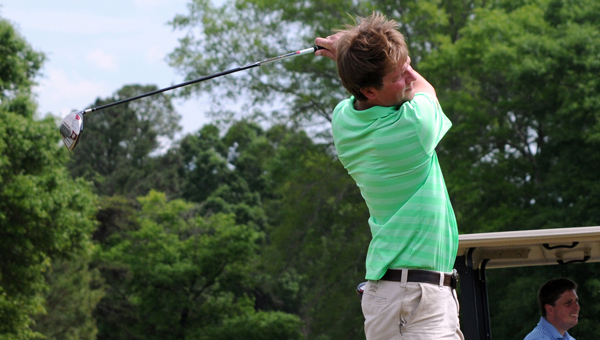 Zach Hughey tees off above at the 19th annual Selma and Dallas County Chamber of Commerce golf tournament on Wednesday. Below, Chris Rossi, Donald Horton and Jimmy Robitaill play for the E-HWA team.

Pine Belt Wireless, First Avenue Cleaners and the Smitherman Brothers walked off the green as first place teams at the 19th annual Selma and Dallas Chamber of Commerce golf tournament on Wednesday.

“It was definitely a golfer’s day,” said Chamber of Commerce executive director Sheryl Smedley. “It was perfect weather for golfing.”

For closest to the pin, Steve Smitherman won at hole six, Ryan Stone at hole seven and Lynn Britt at hole 11. The winners were each given a $25 gift card to Marks Mart. Britt was also awarded a Dixon Golf Package.

Twenty-two teams congregated at the Valley Grande golf course for some friendly competition of three-man shuffle to benefit the Chamber of Commerce.

Smedley said the fundraiser is also a good time for people within the community to network and socialize.

“The goal is for everybody to have a good time and to meet new friends,” she said.

Entry fees were $240 per team or $80 per player. Admission included two mulligans per player, lunch and a golf cart. The lunch menu featured burgers and hotdogs and was catered by The Grillman.

Johnny Moss Sr. has been golfing for nearly 37 years and has done his best to attend every chamber golf tournament. He was part of the First Avenue Cleaners team and said he enjoys the comradery of the event of working together for a bigger cause.

“The funds that the chamber golf tournament raised, it goes to help the community,” Moss said. “I like to participate with charitable things.”