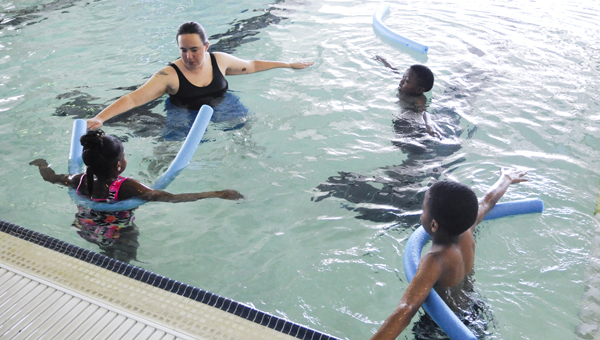 Instructor Skyler Hysler teaches Taylor Rose, 8; Calvin Roberts, 8; and Jaylen Hayes, 11, how to do the plane stance and float on their backs during a water safety course Tuesday at the YMCA of Selma and Dallas County. The YMCA is partnering with local schools for the free classes.

The YMCA of Selma and Dallas County is making a splash by offering free water safety classes for second and third grade students.

“We have ponds and rivers and lots of places that little children could slip, and they need to know how to get themselves to the side,” said YMCA of Selma and Dallas County executive director Ann Murray.

So far, the YMCA has partnered with Ellwood Christian Academy. However, Murray said the ultimate goal is to expand the program to schools throughout Selma and Dallas County.

Students’ parents do not have to be a member at the YMCA in order for the children to participate.

“It means so much to the YMCA to include every member of our community,” Murray said. “Generations of children have learned to swim at the Y, and we are just continuing that.” 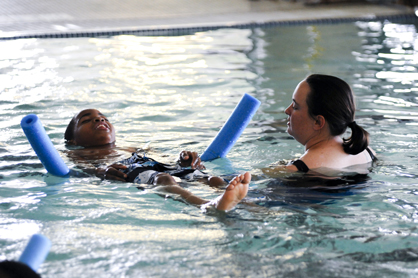 Instructor Skyler Hysler teaches Jaylen Hayes, 11, how to float on his back during the Safety Around the Water class Tuesday.

The classes are held twice a week, on Tuesdays and Fridays, and are less than an hour long. During that time, children are taught safety tips such as to not run around bodies of water and what to do should they fall in.

“It’s typically safety outside of the water,” said class instructor Skyler Hysler. “But the ultimate thing is if they fall into the pool they know the safety of getting out.”

“They’re really pumped up about it,” she said. “They don’t want it to end. They wish they could do it all summer.”

The class normally accommodates for about eight children.

However, on this Tuesday there were only three because of varying circumstances.

Taylor Rose, 8, said she likes to swim and enjoys coming to the classes.

Eleven-year-old Jaylen Hayes said he enjoys everything about the class.

“We have lots of fun,” Hayes said.

Calvin Roberts, 8, said he has learned a lot during the classes on water safety.

“Anytime that children re around [water], I think it is very important for them to know how to swim,” Boles said. “You never know when an accident may occur.”

Murray said there are plans to continue the program during the summer for those who are interested.

“We’ll continue it for the summer for anybody that wants to come for free so that they can get their bearings around the water,” she said.

For more information about the water safety program, call the YMCA of Selma and Dallas County at (334) 874-9622.