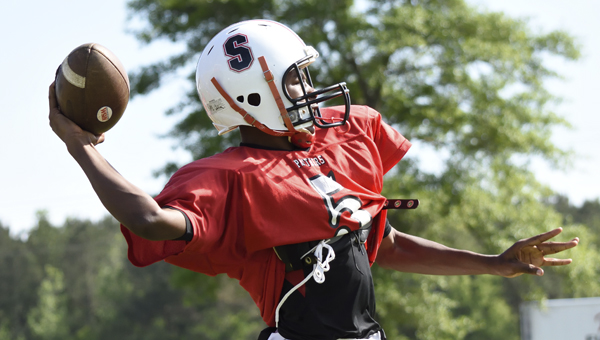 Southside head coach Daniel Flowers probably didn’t realize it then, but he started preparing for the 2016 season during last year’s spring practices. At that time, the Southside quarterback situation was in flux, with rising senior Khamari Gibbs not at spring practices and nobody with experience lined up behind him.

Without Gibbs, who had started since his tenth grade year, the Southside quarterback battle last spring sounded like the name of a law firm.

Johnson, Johnson and Johnson — DeQuan Johnson, Malik Johnson and G’Neil Johnson — battled for snaps and for the starting role. As it turns out, nobody won the competition.

Gibbs returned to the team and led the Panthers’ offense in the fall. He threw for 2,875 yards, 32 touchdowns and signed an academic and athletic scholarship with Alabama State University of National Signing Day.

Unfortunately for the Panthers, Gibbs doesn’t have any eligibility left. The search for Southside’s next quarterback started Monday when the Panthers opened spring practice.

Malik Johnson, a rising sophomore and G’Neil Johnson, a rising junior, are still battling for the starting role. DeQuan Johnson, who caught 23 of Gibbs’ 32 touchdowns last year, will likely be staying at wide receiver after a year that saw him named to the Alabama Sports Writers Association’s all-state team in class 4A.

Derrick Griffin, a rising sophomore who transferred from Ellwood Christian Academy, is also battling for the quarterback spot.

“I think it will probably come down to G’Neil and probably Mailk because of experience,” Flowers said. “G’Neil knows every play but I didn’t need him last year because Khamari didn’t get hurt last year. Malik is probably the future… he’s got an arm, and he’s fast just like his brother.”

However, Flowers said he isn’t counting anyone out, including incoming eighth graders from Tipton Middle School.

Things could be looking up for a Southside program that hasn’t had a winning record in over a decade. Many key players, including nearly the entire starting defense, are slated to return for the Panthers in the fall.

Plus, an influx of newcomers could give the team plenty of depth, which has been a problem for the Panthers in recent years. Flowers said there were 50 players at practice Tuesday and that he didn’t know many of their names yet.

“Some of them don’t know my name,” Flowers said. “They just call me coach.”

The Panthers have nearly three weeks before they finish the spring in a home jamboree game against A.L. Johnson on May 6. By then, he’s hoping Southside will be on track for a winning season.

“This is one of the best parts of the year,” Flowers said.