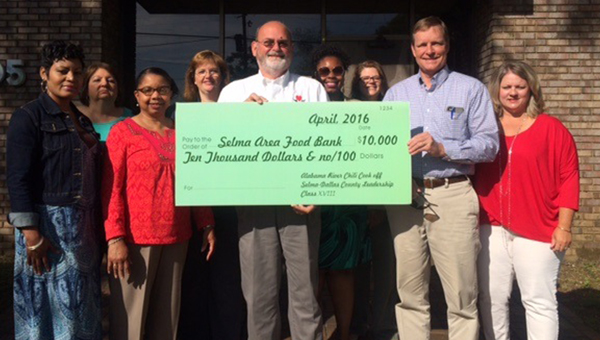 After another successful year with the annual Alabama River Chili Cookoff, the Selma-Dallas County Leadership Class of XVIII presented the Selma Area Food Bank with a $10,000 donation.

“It means the world to us,” said food bank executive director Jeff Harrison. “Getting that kind of contribution is just a testimony of what Selma can do and what can happen when people come together for a good cause and work. I think it’s very impressive to generate that kind of donation in an afternoon of everybody having good fun and fellowship.”

The donation will be used toward the food bank’s summer feeding programs.

“We have extra demands during the summer,” Harrison said. “It’s real important, especially to children, to make sure they have access to wholesome food. Proper food is just as important, if not more important, than proper medicine.”

The food bank serves as collection, repacking and distribution site for families in Dallas, Perry, Wilcox and Marengo Counties.

“We were kind of skeptical this year because there was a slow start,” she said. “But it turned out to be wonderful.”

In the end, the 2016 event had over 30 teams and hundreds of visitors.

Rose believes moving the cookoff from March to April and the threat of rain were contributing factors to the slow start, but is extremely happy with the turn out.

“Who would have thought that after] five years and $43,000 later this would be such a huge event,” she said. “It has been wonderful.”

Each year the class chooses a different beneficiary. Last year the class donated $12,500 to SABRA Sanctuary, an organization devoted to helping victims of domestic violence.

Rose said it was the grace of God and the contribution from the community that made this year’s effort a success.

“We are just so grateful to the Selma community,” Harrison said. “This is just one of the many examples of the bright sides of Selma.”