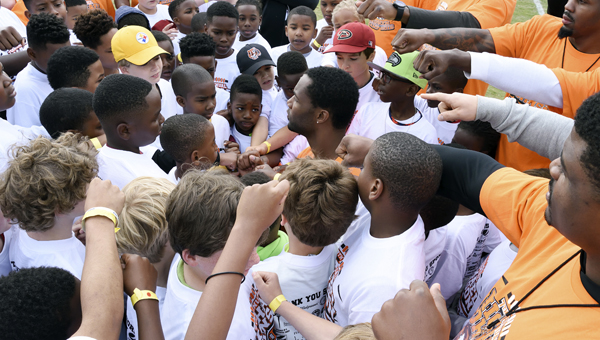 Michael Johnson went from drill to drill Saturday morning at his annual football and cheer camp. He stopped to show campers how to shed a block and even took a turn rushing the quarterback during a passing drill.

Hundreds from in and around Selma took part in the camp — now in its seventh year — and had a chance to get up close to the Selma native, who plays for the NFL’s Cincinnati Bengals.

“God has blessed me tremendously and I feel like I have been blessed to give back to others,” Johnson said. “I try my best to do that.”

Just about every child received a high-5 from Johnson Saturday, as he made his way from drill to drill. The defensive end had some fun with the campers wearing apparel for other NFL teams, like Morgan Academy fifth grader John Beekman Youngblood, who was wearing a bright yellow Pittsburgh Steelers cap.

“[Michael] said ‘that’s a disappointment,’” Youngblood said with a smile.

Of course, Saturday wasn’t just about football and cheerleading. Johnson looked at it as a chance to give back and a chance to remind Selma’s youth of the importance of hard work and other important values.

Johnson wasn’t the only NFL player or former NFL player at the camp. Others involved included Bengals’ teammate Carlos Dunlap and former NFL guard Cordaro Howard. Many other locals and former classmates of Johnson also helped out.

“It is humbling to see someone like Mike, who came from here, a small population here in Selma, giving back and letting the kids know that you too can make it,” Dunlap said. “Football can be your platform but if not football, he also preaches education.”

Johnson had a busy week in Selma. He spoke at the St. James on Thursday night for a fundraiser for Cathedral Christian Academy and then held his career expo Friday evening at Wallace Community College Selma.

He said he started working out for the upcoming NFL season on March 1, after a short break to give his body a chance to rest. Johnson is planning to play a lighter weight than last season to keep his knees and ankles a little fresher.

He starts his offseason workouts with the Bengals on Monday.