Perkins to be installed as Ebenezer’s pastor 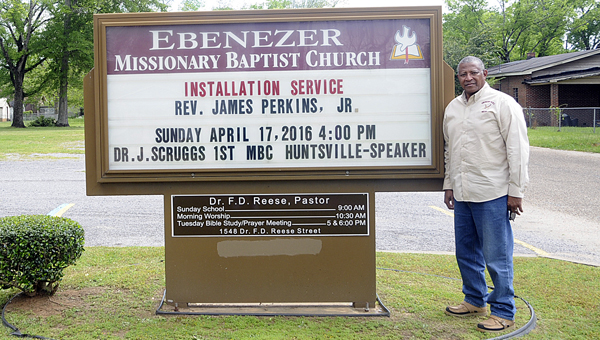 James Perkins, Jr. stands outside of Ebenezer Missionary Baptist Church, where he will be installed as pastor Sunday at 4 p.m. Perkins has served as the church’s associate pastor for the last two years. –Chelsea Vance

Many of James Perkins, Jr.’s relatives have held leadership positions at Ebenezer Missionary Baptist Church. On Sunday, Perkins, will be installed as the church’s new pastor.

Dr. F.D. Reese retired in December 2015 after dedicating 50 years. Perkins said Reese wanted him to take over. Perkins has served as assistant pastor for the past two years and said his duties will not change much as pastor.

“Somewhere during my two-year period of serving as assistant pastor, Dr. Reese assigned me the responsibility to facilitate the meetings of the auxiliary. So, I have been executing the pastoral duties of the church for a while,” Perkins said. “The preaching and teaching won’t change.”

He used the word humble to describe how he feels to be chosen as the next pastor.

“To be able to have watched the process of the church growing over the years has been great. I don’t know any other word to apply to it other than humility,” Perkins said.

One thing on his to-do list is to expand the church spiritually and physically. He said he understands what is expected of him as pastor and plans to go above and beyond members’ expectations.

“As pastor of the church my primary responsibility is to lead people into discipleship,” Perkins said.

“The way you do that is by preaching the uncensored word of God, teaching members to apply the word in their lives and be available for prayer with the congregation.”

He said there will be growth in terms of what the ministry has to offer and mentioned the youth department as a focus.

Charles H. Johnson, Sr. is the chairman of the deacon board and the Sunday school superintendent at Ebenezer. He said he believes Perkins will do a great job as pastor.

“He has been on the ground running for a while. Ever since he started working with Dr. Reese, he has had the autonomy to do various things here. There has not been any huge problem as far as his learning curve,” Johnson said.

“I’m excited and I’m looking forward to the congregation being supportive of him.”

Perkins will be installed Sunday at the church, located at 1548 F.D. Reese Street in Selma.

The ceremony will start at 4 p.m.