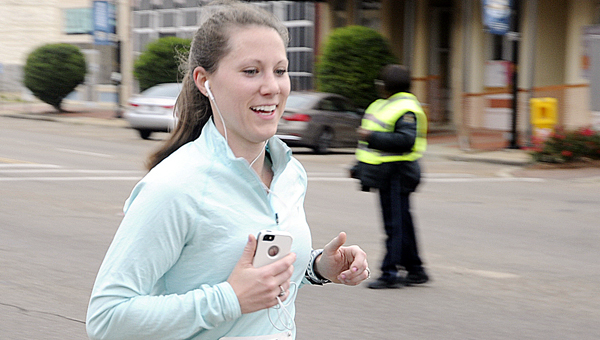 There were dozens who registered for the run, which was split into two categories, a two-mile fun run and an 8k race.

Run coordinator Bill Potter has been a part of planning the race each year since it’s inception. He said each year is a lot of work but fun at the same time.

“For me, the run is important because it’s keeping the kids motivated to stay in school. The athletic department in any town is what brings the school together. So, if we can give the kids a good environment, it would encourage them to stay in school and get a better education,” Potter said.

All runners paid a registration fee that varied depending on his or her age. Those who waited until the day of the race and was up to 14 years old. They had to pay $15 while adults had to pay $25.

Those who preregistered paid $5 less, $10 for children and teens and $20 for adults.

Businesses such as City Tune Up, Winn-Dixie, On Time Fashions, Papa John’s, Tally Ho and others sponsored the event by donating money and gift certificates that were given as door prizes to runners.

This was the first time Tracy Stevens ran in the Butterflies and Bridges Run. She participated in the eight-mile run and said it felt good to do her part in giving back.

“My experience was awesome. I thought it was really fun. I had a great time. I was excited to see the proceeds went toward supporting Selma High sports. I think I will definitely do this again,” Stevens said.

Selma High School Interim Athletic Director Eugene Foster said the event is good to bring people together for a good cause.

“It’s benefitting the athletic department as well as people from all walks of life. We’ve got parents, students and other people from the community to come out collectively,” Foster said.

He said he was glad people did something to get involved with better health and had fun at the same time.

Foster has plans to use money raised from the run to pay for traveling to and from games and other expenses for sports programs at Selma High.

“This is something people can do for their health. This is an event to keep for the long run,” Foster said.