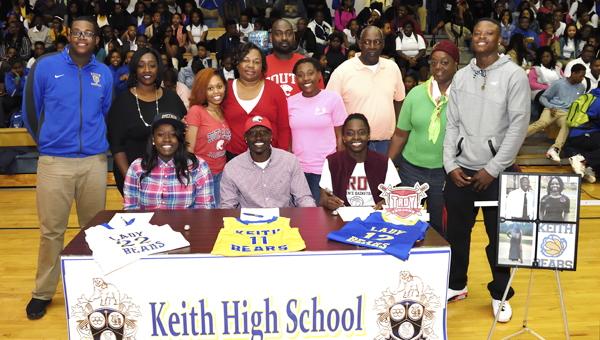 ORRVILLE — It’s rare than any size school has three players sign to play a college sport on one day, but it’s even rarer when it happens at a 1A school.

Of course, most schools would love to have the basketball talent Keith Middle/High School produces on a regular basis.

In one of the biggest signing days in school history, Keith students and faculty cheered as basketball stars John Pettway, Zykia Pettway and Harriet Winchester each announced where they’d be attending school next year.

Winchester had actually officially signed during the fall, but did the signing quietly and didn’t have any kind of celebration.

All three had already sent in their paperwork, but no official celebration had been held. On Friday, the trio of cousins was recognized in front of the entire student body.

“It feels like a dream come true,” John said. “This is what we always dreamed of playing in the backyard against each other and fighting after we lose. We always just dreamed of this moment and to have it with our friends, family and coaches just feels good.”

Each accomplished so much during their high school careers. Winchester and Zykia helped the Bears win the 1A state championship in 2015. John took Keith back to Birmingham for the state semifinals this year for the first time since 2011.

Photos of those moments were hung on the gymnasium’s wall and gave each a chance to look back at their career.

“It makes me feel kind of famous,” Zykia said.

Winchester, who was named the 1A Player of the Year last week by the Alabama Sports Writers Association, said it’ll be different with all three attending different colleges, but she said they’ll see each other regularly.

Troy and South Alabama play in the Sun Belt Conference, so she’ll likely see John at some of those games. The Troy and Stillman women’s programs opened last season against each other in an exhibition, so there’s a chance she could play against Zykia in college at some point.

“I’m going to miss it, but you’ve got to move on to bigger and better things now,” Winchester said.

Before they held their signing Wednesday, they asked for the table they were sitting at to be turned around so that the Keith student body would be sitting behind them in photos. John said it was important to include their friends and family members in the crowd because that’s who pushed them to their success.

“It let our classmates know and our community know that we do this for them,” John said. “Coming out and playing, we were trying to get them to Birmingham as well as ourselves.”

Over the last several weeks, Georgetown wanted John to take a visit and Western Kentucky offered him a scholarship, but he never wavered from his commitment to South Alabama.

“I’m not going to tell a story,” John said. “It was a hard decision. I had Georgetown and Western Kentucky come in so I had some big schools to choose from, but South felt like home. They have my major, plus I felt like I’d be taken care of, not only on the court but in the classroom as well. It’s just a great place for me to go.”

Zykia will get a chance to play for one of the greatest basketball players in Keith history at Stillman. The Tigers are coached by Orrville native Cassandra Moorer.

“She is well known to the family and she is no stranger. I feel like I have family near to go to when I’m up there,” Zykia said.

John said he was thinking of his grandmother, Dorthy Pettway, and friend, Rod Scott, who have both lost their lives since March. Rod, a student at Lee High School, had been set to attend Jacksonville State next year.

“She is still looking down on us and we are doing this and making her proud and going to the next level to make it to her more proud,” John said.

“And my friend Rod, this was supposed to be his day as well … I know he’s still with me in spirit and I know how hard he worked. I’m going to put in extra work for the both of us and just going to make our dreams come true.”

All three took photos with friends and family and they even got a final “Go Bears” from the Keith crowd. Keith athletic director Tommy Tisdale said it was one of the biggest signing days the school has ever had.

“To have three sign and get full rides — I don’t want to say it’s impossible because it just happened — but it’s remarkable,” Tisdale said.