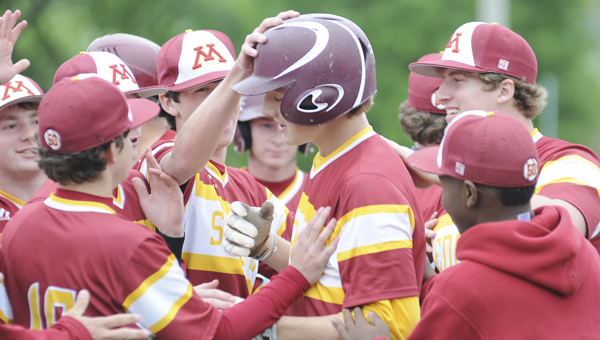 Morgan Academy baseball players congratulate Gunnar Henderson for his walk-off hit in the bottom of the seventh inning in the first game of a playoff doubleheader against Fort Dale Academy Friday. Henderson’s hit sent Landon Davis home for the game-winning run to give Morgan a 6-5 victory. The Senators won the next game 6-0 to advance. — Justin Fedich

The Morgan Academy Senators lost the lead in the seventh inning, but it didn’t take long for them to get it back.

In the first game of a first-round playoff doubleheader in the Alabama Independent School Association playoffs Friday at Morgan, Gunnar Henderson hit a walk-off RBI to send Landon Davis home for the winning run over the Fort Dale Academy Eagles. Morgan edged Fort Dale 6-5 in the first game and clinched a date with Glenwood Academy in the second round with a 6-0 win in the second game.

With the win, Morgan (20-10) finished with its first 20-win season in at least five years, according to head coach Jeremy Carter. With plenty of experience on his roster, Carter said he believed his players would pull through Friday to avoid having to play a tiebreaker game Saturday.

“You never want to get overconfident,” Carter said. “You’ve just got to have faith in your players that they’re going to do the things that you want them to do.”

Miller Spivey started the afternoon on the right foot for Morgan, as he scored the first run as the lead-off batter in the first inning of the first game. After a couple scoreless innings, Fort Dale tied the game 1-1 in the the top of the fourth inning.

The Senators responded by taking a 4-1 lead in the bottom of the fourth inning, as Jackson Henderson, Gunnar and Brayton Brown all reached home plate.

In the top of the sixth inning, Sawyer Hopkins, who had only allowed one run in five innings, gave up three runs to the Eagles to allow Fort Dale to tie the game 4-4.

Brown scored his second run of the game with a home run in the bottom of the sixth inning, putting Morgan back in the lead 5-4.

Davis opened the bottom of the seventh inning with a bunt, and he beat the throw to first base. Spivey did the same, and he made it to first base safely as well. After both Davis and Spivey advanced a base, Jackson Henderson was intentionally walked to load the bases with no outs.

Gunnar stepped to the plate and hit an easily fielded ball straight to the pitcher. Davis took off for home, but he wasn’t going to beat the throw. Fortunately for Morgan, the catcher fumbled the exchange and Davis slid home for the walk-off run.

“The momentum changed right there,” Carter said. “It gave us fresh air for the next game.”

While the seniors played poised and controlled throughout the doubleheader, freshmen Gunnar and Brown each played big roles for their team in their first varsity postseason doubleheader.

In the second game, Gunnar pitched a shutout, going five innings before Price came in to relieve him.

Gunnar’s brother Jackson made big plays early in the second game. In the top of the first inning, Jackson hit a double and later scored to put Morgan ahead 1-0. He almost added more runs in the top of the second inning with a line drive to right field, but it was caught for Morgan’s third out.

“For ninth grader to come in and do that is exceptional,” Carter said of Gunnar’s performance at the mound.

In the top of the fifth inning, Woodham Kemmer hit a ball to shallow left field to send Philip Peake to third base.

Peake scored on a wild pitch to put the Senators in front 4-0. Later in the inning, Kemmer got caught sliding into home base, but Morgan still held a comfortable lead going into the bottom of the fifth inning.

Gunnar held strong once again, striking out his first two batters and fielding a ground ball to end the inning.

Price came in with similar success in the final two innings, as Gunnar and Hopkins added two more runs, scoring from third off errant pitches to win by a six-point margin.

“To come back and win some tough games, we’re showing some composure, and that’s what we need,” Carter said.

The Senators will face Glenwood Academy in the second round of the playoffs Thursday on the road. Morgan played Glenwood in its first game of the season and lost 9-1.