Zakaiya Hill got a sweet surprise earlier this week when Selma Fire Department Station 5 firemen bought her ice cream after she broke her arm. 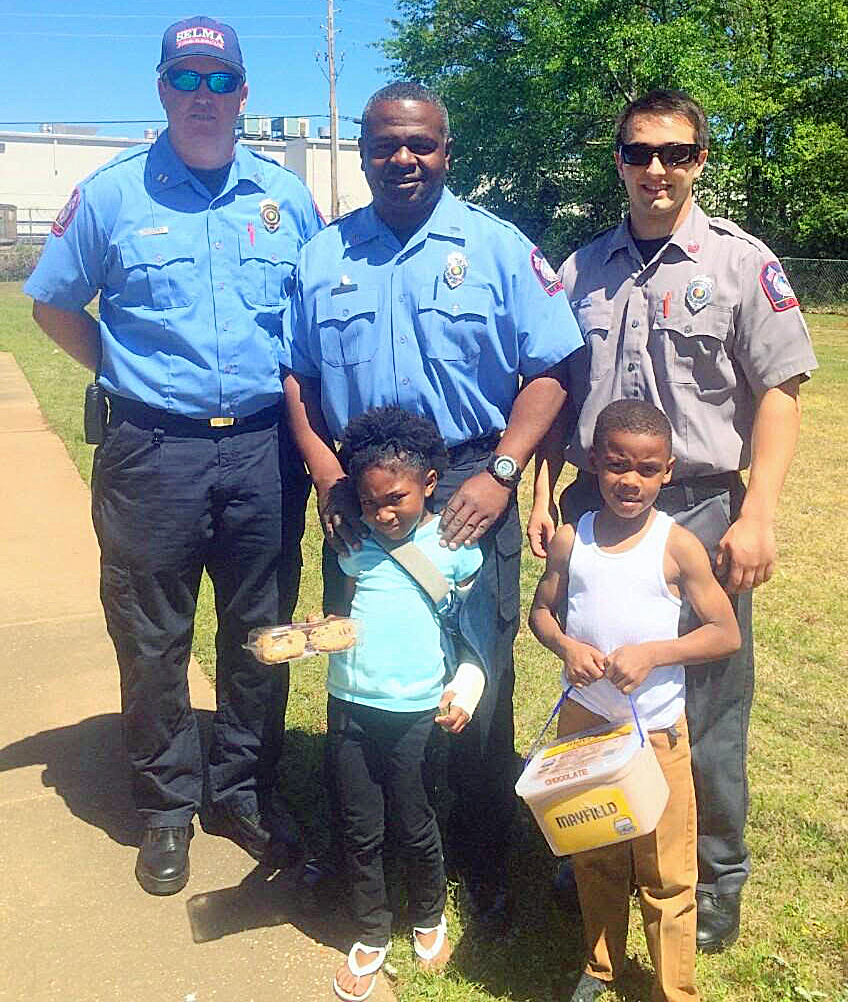 Selma Fire Department Station firemen bought Zakaiya Hill ice cream after she broke her arm. Pictured from left to right on the front row is Hill and her cousin Patrick Davis Jr. On the back row from left to right is Capt. Kevin Jones, Sgt. Chad Mitchell and firefighter Brandon Vaughn. –Submitted Photo

Hill was crossing the monkey bars when she was knocked down and broke her arm.

A young boy who saw what happened ran across the street to the fire station to get help. Sgt. Chadwick Mitchell, Capt. Kevin Jones and Brandon Vaughan came to Davis’ rescue.

“We ran across the street and called the ambulance. The young lady got medical attention. She was very calm and reserved through all of the pain she was going through. She was very courageous,” Mitchell said.

He said he asked Hill what would make her feel better and she said ice cream.

“I went to her aunt and asked her if we could bring her ice cream and she said yes,” Mitchell said.

Mitchell, Vaughan and Jones delivered it to Hill’s house a few days later.

Hill said when the firemen bought her ice cream, she was excited and it made her feel better.

Davis said she is appreciative the firemen went above and beyond to make sure Hill was OK.

“There are still some good people out here that really care. They did their job and giving her ice cream showed an act of compassion for someone else. It showed us that the staff really cared,” Davis said.

She said since the accident, Hill is healing, feeling better and getting back into the swing of things.

“She is definitely better. When she first broke her arm, she wouldn’t eat and we had to feed her. Now she is able to move her arm better. She went back to school two days ago, so she is doing much better,” Davis said.

Mitchell said he has always been able to separate his job from his personal feelings and that what happened to Davis hit home for him.

“I can’t stand to see a young child suffer. I felt emotions and was heartbroken by her suffering like that. So, bringing her ice cream was the least I could have done,” Mitchell said.