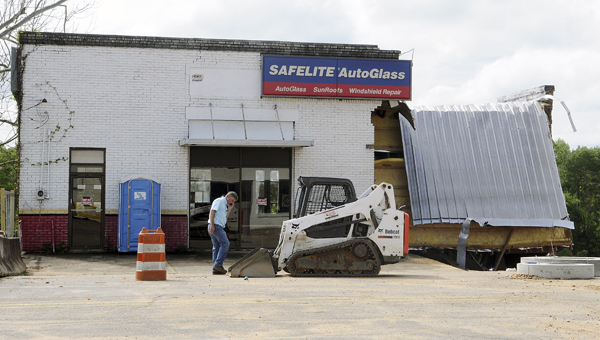 The roof and a wall on the Safelite Autoglass building on Water Avenue fell following storms on Wednesday evening. –Emily Enfinger

The Safelite Autoglass building on Water Avenue is beginning to succumb to the riverbank’s erosion. Part of the building’s wall and roof crumbled Wednesday evening, following a line of storms that impacted the Selma area.

“I hate to see it go. It was an iconic structure, not only from the river, but it was just a part of Water Avenue,” said councilman Greg Bjelke. “I’m sure last night’s rain was the final straw that broke the camel’s back.”

Water Avenue has been dealing with sinkholes and the impacts of erosion for the last several years. A sinkhole at the intersection of Church Street and Water Avenue first appeared last spring, but it’s just one of many that have popped up during that time period.

The Safelite building appears to be its latest casualty.The building is still standing upright, but the portion of the wall nearest the erosion, and parts of the roof, have fallen. The Safelite building is owned by Blue Jean Services of Dallas County, a nonprofit organization with a vision to transform and revitalize Selma through authentic gospel. Blue Jean’s Dane Shaw said the organization is unsure of what will happen to the building at this point.

“We are just working with the city to do what’s going to be best for all parties,” he said. “We can’t rebuild a building that’s been compromised like that. We’re just going to have to get together with our team and figure out where we go from here with the property.”

Shaw believes the building was compromised when the sinkholes first appeared.

Bjelke believes the damage wasn’t from one thing alone, but possibly a combination of problems over time.

“It was like a sweater that was unraveling. It started with a little this, little that,” he said.

City contract engineer Ray Hogg said workers are still assessing the situation and have not determined a cause for the building’s collapse.

The project was estimated to cost between $200,000 and $250,000 and was scheduled to take about a month to complete in ideal weather conditions.

“They’re working now. I’m sure the weather has slowed them down, but they are working now as quick as they can,” Bjelke said.

“We’ll just have to do the best we can. Maybe something good will come out of this.”